My roommate's girlfriend is, of course, a girl, and is therefore required to watch this fucking show and care about it.  Hey look, the Black Eyed Peas, I'm going to shoot myself in the fucking face.  In case you haven't seen this show, there are two people left: Kris Allen and Adam Lambert.  Here is Kris Allen, the normal, manlier looking one of the two.  Remember that I said the manlier looking one: 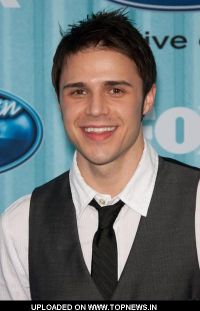 He looks like some sort of unholy mixture of Kermit the Frog, the shitty brother's friend on Boy Meets World and Nick Lachey.  This guy was actually not that bad; I mean, he sucks balls and is from the South, but I didn't want to punch him in the face 5% of the time, which puts him miles ahead of this guy: 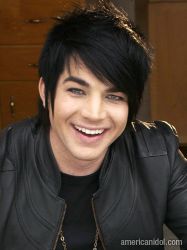 Jesus Tittyfucking Christ.  People like this are popping up all over the United States and people want to take fighting out of hockey?  There was not one time in the entire show that I was not praying for this guy to get dropped by a bolt of lightning.  Everything about him is just the worst: his hair, his clothes, the fucking faces he makes when he sings, everything.  See, this is why I like hockey: the lamest dude in the league wears vests and talks about fashion design, but he also gets punched in the face and calls people pieces of shit.  If this guy were in a fight, the only doubt would be if he shat himself before or after he dropped into a ball.  I hate this country some times.  Listen to his, uh, interesting rendition to Ring of Fire:

OK, so these are our two competitors.  The only, and I mean only, thing they need to do for the finale is reveal who wins: Kermit Lachey or King Cockfag.*  How long does that take, 2-3 minutes?  Nope.  2 hours.  2 mind-numbing, penis-shrinking hours.  They gave out awards, showed like a 4-minute montage of Simon Cowell saying, "What?" and pretty much hinged the show's watchability on Ryan Seacrest's charisma.  Whoops.  There were sweet cameos by Cyndi Lauper, Queen Latifah (fat), some ugly bitch in a bikini, some uglier bitch in a bikini, fucking Kiss, and the aforementioned Black Eyed Peas.  And the absolute worst was seeing Steve Martin, Steve "He Hates These Cans!" Martin on the stage playing the banjo.  (He didn't even play King Tut!)  I mean... I don't know what's going on, but the show is called American Idol and I feel like it's showing a different dimension.  I don't know who anyone is, I haven't heard of any of these songs... it's seriously a completely different world that I was thankfully unaware of before tonight.  To paraphrase Hunter, "[American Idol] is what the whole hep world would be doing Saturday nights if the Nazis had won the war. This was the Sixth Reich."

*I know it's probably not cool to call the guy a cockfag since he's actually gay, but to be fair the guy really looks like a cockfag. 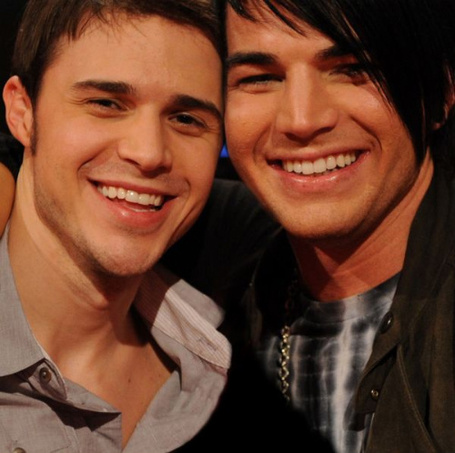 Alright, so there's a whole bunch of stupid shit going on and a lot of terrible songs being sung terribly and I'm going to kill myself but trying to be polite, and here's the amazing thing: my roommate's girlfriend fucking loves it.  She laughs at all the jokes, gasps at the surprises, and frantically texts her friends at every twist and turn.  It's weird to people like me and you, but I think it gives us a little bit of an insight into how people look at us when we watch hockey.  Think about it: how many times have you brushed off someone's stare when you either cheered or cried out in anguish at a ticker score on ESPN?  How many times have you wondered why people can't possibly find the Kings as interesting as you do?  Do people give you strange looks when you admit you cried when a certain lilliputian defenseman gets traded to a certain frozen tundra?  Congratulations: we're as unhinged as American Idol fans.

That, more than anything, makes me want to kill myself.