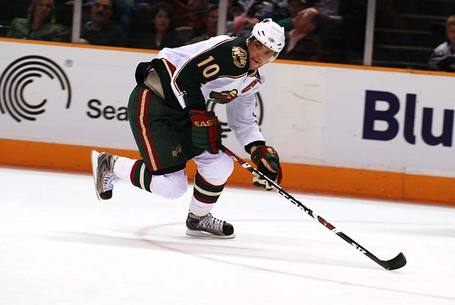 The Kings have the following young talent at the forward position: Ted Purcell, Oscar Moller, Trevor Lewis, Brian Boyle, Brad Richardson, Matt Moulson (whatever happened to him?), Marc-Andre Cliche, and whoever they draft in the 1st round.  With the exception of Cliche and Moulson, everyone listed is supposed to be a top-six player.  The problem, of course, is that the Kings' top 6 will probably look like this next season:

In the bottom six, the only people guaranteed jobs are Michal Handzus, Wayne Simmonds, and Raitis Ivanans/Kevin Westgarth.  The holes are: checking line left winger, bottom line center, and agitating right winger.  It's funny to say, but I don't see Oscar Moller or Ted Purcell fitting either position.  Moller will likely spend most of next season down in Manchester, which is a good thing, but I don't see where Purcell fits into this team.  Is it Manchester again for him, does he get poached by another team (which would be a great pick-up for an enterprising GM), or do the Kings just let him go?  It'll be interesting to see.

Michal Handzus and Wayne Simmonds were fantastic last season and helped the Kings drastically improve their goals allowed.  The only thing missing for them is a right winger that can pitch in a few goals and can maybe go to blows every once in a while.  The Kings could hope Moller, Richardson or Moulson can grow into that position, but I don't think the Kings can really afford to take that risk.  I'd much rather they go after a free agent.  The name'll sound familiar:

I would absolutely love Travis Moen on the Kings.  He could fill in the exact same role he took on the Ducks and would fit in perfectly with Handzus and Simmonds.  Of course, he's going to re-sign with the Sharks so that sucks, but maybe Dean can work some magic.

I see the Kings doing on of two things to fill that 4th-line center position: either re-signing table tennis champion Derek Armstrong or opening the job to either Brian Boyle or Trevor Lewis.  Boyle is getting his last, last, last shot at making an NHL roster, while Lewis has completed all of his steps in getting to the NHL and deserves a look.  I think Boyle will win the job early and then give way to Lewis as the season goes along.

The fourth line right winger position I don't really care about, just please do not put John Zeiler there.  Give it to Richardson, or Moller if you want to keep him up, or even that Clune guy that everyone was jacking off to last training camp.  Just not John Zeiler.  Please.

On defense and goaltender, I don't really see the Kings signing anyone.  I'd like to see the Kings sign a defender that can play solid defense and protect Jack Johnson, but that's just me being greedy.  There is a spot vacated by Denis Gauthier, but the Kings can just open that job up to Drewiskie/Hickey/Voynov/Piskula/Harrold/Preissing and call it a day.  The Kings have 3 goaltenders (Jonathan Quick, Erik Ersberg, and Jonathan Bernier) that are all on 2-way contracts so they have plenty of flexibility there.

The Kings are going to have a fairly quiet off-season.  They need to make one major acquisition (people seem to agree that Marian Gaborik is the best choice) and one minor acquisition (a checking left winger like Travis Moen) and that's pretty much it.  Here's how I see the Kings looking next season if everything goes according to plan (because that's guaranteed to happen):

I know it's suprising to look at a team that's 5th from last and saying, "Hey, we don't have to change that much," but I really don't see much room for change.  Remember, this is best-case for the Kings, in my opinion.  I'll get into what I think about this line-up in a little bit, but I just want to submit one question to you: does this look like a playoff line-up to you?