Share All sharing options for: SBN Mock Draft: With the 5th Pick...

Sorry I don't have some big build-up for you, but I figured I'd save you the suspense and just let you know right now.  Now, I'm not saying Brayden is the best pick, or the one the Kings should necessarily make, just that he's the one that Dean would likely make.  Yesterday's poll decided that Evander Kane was the choice for most LA fans, but he's gone because The Falconer from Birdwatchers Anonymous is a bastard.  Kane is a great pick for Atlanta for 2 reasons: one, he has the highest upside of any available prospect, and two, you'd be foolish to argue that drafting a young black man is not a good thing for Atlanta.  So the Kings are really left with a decision between Brayden Schenn and Magnus Paajarvi-Svennson, and if you consider Dean Lombardi's history then it's really a no-brainer. 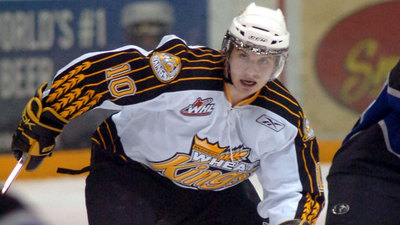 There are two trends you can easily decipher from Dean Lombardi's draft history with the Kings: he loves kids from Western Canada, and he doesn't really like Swedes.  Brayden Schenn is a WHL product, and Magnus is a Swede.  Lombardi is a big fan of drafting and signing what he believes are underutilized areas in scouting and exploit those deficiencies when you're drafting.  Western Canada is traditionally lower scoring and is generally not as well-publicized as the OHL and QMJHL, so it makes sense they would be underrepresented.  Schenn is a great player, solid defensively, and a good kid to boot, so he seems custom-built to be a Dean Lombardi draft pick.  Of course, Lombardi will draft Wang Xiu Ping with the pick and then rationalize with some half-assed explanation about boxes, so who the hell knows. 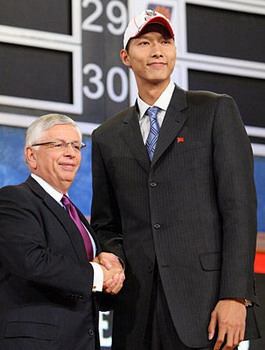 Schenn, of course, is the brother of Luke Schenn, fine hockey player (and not Drew Doughty) who plays for the Toronto Maple Leafs.  Despite his girly name and pudgy face, Brayden is similar to his brother in that he hits and fights and leads men into battle.  Schenn led his team with 32 goals and 56 assists in 70 games this season, to go along with 88 penalty minutes.  Those penalty minutes were buoyed by 5 fighting majors, including 2 against guys named "Mitch."  (Good call.)  Schenn is a leader, a scorer and an all-round solid hockey player.  Of course, so is Jarret Stoll, so there's that.  The biggest reason the Kings should take Brayden Schenn?  It'll piss off Toronto fans, which is always hilarious.  Something else that pisses off Toronto fans?  Bring up Gretzky's high stick.

Of course, the real winner of yesterday's poll was trading the pick.  For who, though? I've read thousands of rationalizations and opinions, and at this point all I can say is: Fuck, dude, I don't know.  Who the fuck cares, trade for Sheldon Souray, trade for Daniel Briere, just give me peace.  My personal draft day wish?  Trade the 5th and Jack Johnson for Tomas Kaberle, Alexei Ponikarovsky and the 7th overall and then draft Magnus Paajarvi-Svennson (who I personally like more than Schenn).  I don't know, we'll see in the next few days.  I just want to have a good night's sleep for once.

What do you think?  Who would you like to see the Kings draft, or trade the pick for at least?  Explain how retarded I am in the comments.

(Here's Hockey's Future's take, wherein they posit that the Kings will trade for an elite forward and then draft Jared Cowen.  OK.)