Sleek's lame excuse for not posting for a while

Share All sharing options for: Sleek's lame excuse for not posting for a while

Hey everybody, guess who's blogging again? Your second-favorite* Ducks fan, Earl Sleek!  I totally apologize for the month-long disappearing act -- and I guess we'll get started with that explanation.

* besides yourself, I assume

I'm alive and well -- hopefully nobody got too worried there -- it's just that I'm less employed than I used to be. The company I worked for basically ran out of money, and while that may mirror a sad job story for many in this era of unemployment, for me it was a flat-out-awesome turn of events. You see, my life has been one of all-too-steady jobs: after graduating college, I spent exactly one week unemployed before landing a job -- seven years later, I took three days off between jobs.  Sure, I've had vacations during those stretches, but being unemployed is a different matter entirely -- no e-mail to check, nobody threatening to call me with a question -- it's pretty damn cool.

Now I've watched former roommates go through unemployment stretches (plus my dad who goes insane when he periodically goes into retirement) and I know that it will drive me crazy over time -- but for the first month, at least, it's been great.  A lot of video-gaming, late breakfasts, spur-of-the-moment excursions, bad movies, and morning liquor.  I should add that I'm not hurting for money for the foreseeable future -- I'm still a lucky S.O.B., after all.

So why, then, with no day job and oodles of free time, have I fallen off the blogging map?  Why is the lack of busywork and my recent inability to remember what day-of-the-week-it-is interfering with my ability to throw together a handful of posts every week?

A few things, I suppose.  Definitely laziness, and perhaps some blogger fatigue as well (three years wears on the fingers).  But the biggest factor, I'm sure, is that I haven't been reading anything -- news or blogs -- related to hockey since the Ducks were eliminated.  It's not that I'm avoiding it, necessarily, but I'm not spending eight hours in front of the computer monitor these days, and that's been as huge a reason as any.  I'm not even sure if anything has happened on the Ducks' end in the last month, other than losing Francois Allaire to Poppa Burke in Toronto and a botched-rumor Pronger trade -- feel free to let me know in the comments if there's been anything noteworthy I've missed.

So anyways, that's why I've been off the grid lately, but this isn't a "hang em up" retirement post.  In fact, the main message of this post is that I'm back -- the month off was very nice, but it's time to dust off that swearing dictionary and get back in the blog game.  I made this table a week ago -- it may even need updating -- but this looks to be what GM "Barstool" Murray will be building around this summer. 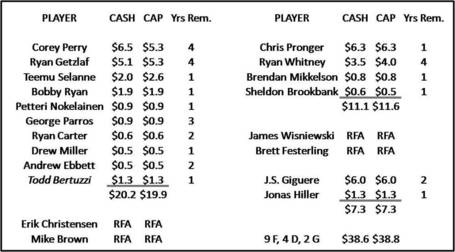 We'll need to see what Scott Niedermayer and Teemu Selanne decide to do before we can make any serious commentary as to how to finish out this roster, but waiting for those two is already an annual summertime tradition in Anaheim.  To me, the key question is "Will Scott play next year for a discount?"  If not, then I suspect Murray will have to deal one of Pronger or Giguere, but we'll see.  I offer this mainly as food for thought for now -- we'll get deeper into roster decisions later this week.

Oh yeah, and thanks to the rest of the BoC writers for carrying on despite the unannounced disappearance.