Pronger No Longer: Captain Elbows gets traded for Loops again?!

Share All sharing options for: Pronger No Longer: Captain Elbows gets traded for Loops again?! 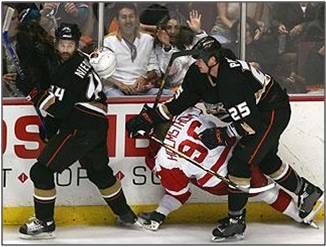 Captain Elbows is off to Prongerdelphia. Wow.

So amidst all the excitement of the most boring television ever in yesterday's entry draft, GM "Barstool" Murray made a huge splash by sending Chris Pronger to Philadelphia in what essentially looks to be a reversal of the trade three years ago -- Joffrey Lupul, a young d-man prospect, two first round picks, and a throw-in pick.  How Murray was able to squeeze out that nearly-identical payout from Philly's GM is astounding -- for sure Pronger is a world-class talent and a difference maker and deserves a rich trade reward, but Philly isn't trading for four years of a locked-up Pronger like Burke was.  We'll have to see how the other pieces fall together (namely, how much will Scott sign for, and what's up then with Rob, Frenchie, and Marchant?), but already there's some good news.  Teemu, who seemingly always makes his career moves based on Scotty, has now committed to play out his contract next season -- at a cool $2M, that's fantastic.  Here's how the cap math works as of now, courtesy of nhlnumbers. 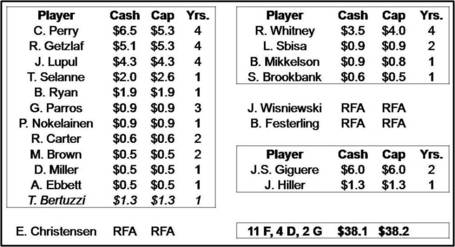 I think this one's up to date now. Still needs some Niedermayer, though.

There's of course a ton to say about the Anaheim career of Chris Pronger -- or really, the three-year era where Ducks fans were spoiled with the talents of both Pronger and Niedermayer -- but I'm not going to inundate this Saturday post with all of that.  This week, I'll be putting a few posts together, though, including a hard look at the comparative stats of Niedermayer and Pronger over the past three seasons.  Even after all this time of seeing both all-stars exchange shifts, it's still a difficult question to answer: who was better?

Also, there's the matter of the return of Joffrey Lupul, who now joins the likes of Travis Green, Fredrik Olausson, Jeff Friesen, and Stu Grimson as two-time Ducks -- fortunately Ducks fans know very well what to expect in Loops, though it will be interesting to see how he's developed the last couple of years.  A wicked shot, a goofy grin, and not a lot of backchecking as I recall -- it may become more imperative that the Ducks re-sign Todd Marchant, as by the end of Lupul's Anaheim career that seemed to be a good fit for the winger; Marchant was Joffrey's center for his infamous 4-goal playoff game.

As for the blueline, it remains to be seen what role Sbisa will play, and I'll need to see some dollar estimates soon for the likes of Niedermayer and Wisniewski.  With the loss of Pronger, the blueline looks to migrate more to the "only one hall-of-famer" allocation of minutes that we probably should get re-acquainted with.  For the first time in a while, I'll know definitively who Anaheim's top defensive pair is next season -- should be a little surreal.  Also, Pronger was really useful in stabilizing Ryan Whitney's defensive shortcomings, and I'm not sure who will be filling that role -- more to come here I'm sure.

Overall, I'm in love with this trade -- we had to know that the Niedermayer + Pronger era was over -- it could have been extended another season, perhaps, but only if Scotty and Giguere were in charitable spirits, and that wouldn't have served the long-term franchise very well.  The Ducks got to use and capitalize on three of Pronger's best years, and while it's possible that Murray has sent the better defender off to the eastern conference, I for sure can say this: Chris Pronger is an awesome player, but for sure I'd rather have Scott Niedermayer + Joffrey Lupul + Luca Sbisa + 2 first round picks.  For fucking damn sure.