Pronger No Longer: A 3-Year Look at Project Norris

Share All sharing options for: Pronger No Longer: A 3-Year Look at Project Norris 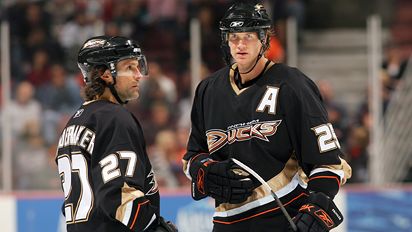 Who was the better Duck player over the past three years, Scott or Chris? You decide.

In the aftermath of the draft-day trade that sent Chris Pronger over to the Philadelphia Flyers (see some Broad Street reaction over here) plus the imminent signing of Captain Scott Niedermayer, I thought I'd take a statsy look back over the past three years where Ducks fans have been spoiled by the multi-complementary talents of Niedermayer and Pronger on the blueline. It's largely an academic pursuit, as again, given the choice I'd rather have Niedermayer + Lupul + Sbisa + 2 firsts than Pronger by himself, but still I think it's the type of question that can help us better appreciate Project Norris -- looking back over the past three seasons and postseasons, who has been the better player: Niedermayer or Pronger?

It's a question that may have no particularly strong answer, as both have been fantastic stabilizing talents on Anaheim's roster throughout their shared tenure, and there's always complications regarding how their minutes were allocated -- as a general rule they played apart, except for power play and 3-on-5 situations (or Stanley Cup Finals series). On some nights Niedermayer had the tough assignments, on others Pronger had to do the heavy lifting, and on many other nights it was a blended coverage. At any rate, let's get started with this comparison by taking a glance at the counting totals:

Here's the basic counting stats, including playoffs. Not much to pick based on points-per-game.

Not a whole lot to note here -- Scotty played fewer games and was actually a minus player over the duration, though some of that can be attributed to Carlyle's "breaking in" new defensemen under Scotty's wing -- Pronger generally had more veteran partners. In terms of points-per-game, there's hardly any separation between the two. Though they contrast a good deal in terms of style, that contrast is not apparent on the scoresheet.

After the jump, some more situational data-delving and discussion.

Below is a situational breakdown of the three-year stretch, and really -- this could really be considered the "meat" of this post's analysis. It shows how each player did in three types of situations: even-strength, on the power play, and shorthanded, and converts all results into a per-60-minutes scoring rate. This table includes regular season and playoffs from the past three seasons -- 249 games for Niedermayer and 258 for Pronger.

Pronger has the outscoring results edge in all situations, though Scotty does have a dozen more even-strength points.

For me, the last column is the one that matters the most, as it measures situational outscoring, and you can see that in the situations where they played apart Pronger comes out ahead. Niedermayer does seem to produce points better at even-strength, but even with the additional offense he more or less plays 5-on-5 as a wash (which still isn't bad when you're facing you're share of Thorntons and Datsyuks). The penalty-killing was pretty close, though, and I was surprised to see Niedermayer score more power play goals than Pronger, considering Scotty can't really fire the puck.

I guess one thing that needs to be considered, though, is how each player did benefit from alternating with the other -- neither had to carry the entire load with the other player in the lineup. For my last bit of data-slicing, then, I took a look at how the Anaheim team performed when one of the two All-Stars was out of the lineup. Pronger had two injury stretches and three suspensions over the three years, 28 games total, and Niedermayer had one injury stretch and 34 games of mock retirement, 37 in all. Here's a look at how the team did in their absences:

Playoff overtime losses get put in the "O" column, btw.

Now on the surface, it seems that the Ducks did much better without Pronger than without Niedermayer, but there's tons of caveats to be made here. For one, most of the "Pronger only" time occurred at the start of the 2007-08 season, when the Ducks all had horrible cup hangover plus a godawful travel schedule plus a slew of injuries (Mark Mowers, anybody?) -- the whole team sucked during that stretch. Of course, a good chunk of the "Niedermayer only" time happened with multiple injuries, also -- one was without Pronger + Giguere + Bryzgalov + Beauchemin + Marchant, and the StompGate suspension occurred without Corey Perry in the lineup.

Even with the limited and asterisked data, though, I think it is worth noting how the Ducks as a whole played better without Pronger than without Niedermayer -- certainly the ability to win Prongerless was huge in winning Anaheim's Stanley Cup, and has bigger implications going forward. And of course, it's awesome to look at the record of the team when both were available -- it was an awesome era that's come to a close, that's for sure (though arguably it was in decline -- the Ducks barely scratched out 8th seed last season and both Niedermayer and Pronger played every game).

Now normally at this point in the post I'd look over the data and come to a conclusion, but even after three years of watching I'm not really sure. As I've been prone to point out, Scott's a defenseman who dazzles the eyes, while Chris is a defenseman who dazzles the spreadsheets. So for the first time in my blog career, I'm going to turn it over to an internet poll. Who was better for the Ducks over the three-year stretch? On the one hand you have Pronger the outscorer: in all situations, Pronger was on the ice for + 379 GF - 267 GA = + 112 GD, while Niedermayer was on the ice for + 352 GF - 303 GA = + 49 GD. On the other hand you have Niedermayer the captain, without whom the Ducks had trouble conjuring up wins.

So have at it -- in the poll and in the comments. Remember, there's no wrong answer; the real point here is that we Ducks fans have been some lucky sons-of-bitches.

As a closing note, blog chairman James Mirtle is putting together 30 teams' worth of UFA coverage, and asked us all to fill in the template below (don't know if you know about this Rudy, I have barely been following myself). Here's what I sent in for the Ducks angle, though it's tough to speculate too much before knowing Niedermayer's salary.