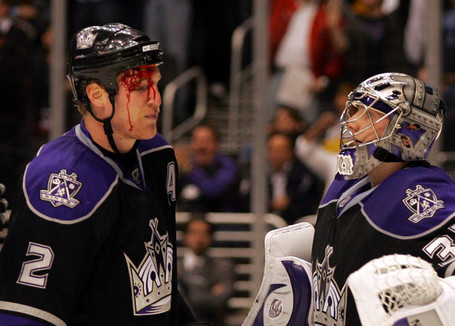 Last Season: When I played hockey in college, we had this guy named Grady on our team.  Grady was an addition the 2nd year I played and was a little older than the rest of us.  We had a tournament up in San Jose at the very beginning of the year and decided to road trip it in a big van to help get acquainted with the new additions on our team.  We grabbed a bunch of beer, some pot and started driving.  Grady didn't say too much on the trip up, but he was cool and nobody had a problem with him.  The only thing I really noticed about him was the he probably drank a dozen beers on the way up and yet seemed completely sober.

Our very first game in San Jose was against... San Jose State, I think, and the game was chippy from the start.  They had this dude on their team that was a giant, about 6'4" 250 lbs. maybe, and he was demolishing our forwards, especially this guy Jason.  Jason was the best player on our team the previous year and was generally a pretty soft player, and he was getting run by this guy every time he had the puck.  I was in net, but I could see our bench getting more and more pissed as the game went on.  Finally, this behemoth slashed Jason right between the hands and broke his stick right in his hand.  (We found out later Jason broke his hand on that slash but he kept playing because, while kind of soft for a hockey player, he's still a hockey player.)

Grady was on the next shift with this big guy out there and when the big guy had the puck, Grady veered off his man and took... yeah, probably the most obvious charge I've ever seen.  I'm serious, he must have taken 15 steps into this guy and jumped about 2 feet into the air.  I'm pretty sure he elbowed him too.  The behemoth stepped back once, twice, and then toppled over in a thud that I swear I felt beneath my feet.  Grady somehow didn't get a penalty and the behemoth was pretty much out of commission for the rest of the game.  The best part was that Grady wasn't one of the guys complaining from the bench; instead of talking about it, he simply did what was necessary to defend his teammate.  From that point on, Grady was a god to the rest of us.

Matt Greene I think is the Grady for the Los Angeles Kings.  Every team usually has that guy, the guy that isn't the best on the team but always does little things that endear him to the everyone else.  For Grady, it was toppling the behemoth and drinking a ton and breaking his collar bone without so much as a shout or the one time in North Carolina he ended up walking down the streets of Raleigh wearing only a skort; for Matt Greene, it's the time he blocked a shot with his face and kept playing, or the times he stood up for his teammates even though he's not a good fighter.  Greene has his faults (he takes too many minor penalties, he has a terrible outlet pass and he probably makes a little too much money), but I wouldn't trade him for any other 4th defenseman in the league.  He is a rock defensively, is a fantastic penalty killer, and has is intagibly* as hell.  If it sounds like I'm gushing, it's because I am.  I love Matt Greene, and I'm pretty sure the rest of the Kings' youngsters do too.

The Future: Matt Greene will likely fill the same spot he did this season: tough defensive defenseman and 2nd-line penalty killer with absolutely no impact on the offensive side of the game.  Last season he played with Handzus and helped shut down the other team's top line.  He'll most likely continue doing that and will likely either play with Rob Scuderi or Jack Johson while Doughty plays with Kopitar. He did a good job against guys like Joe Thornton last year because he's large, but he tended to get burned by guys with speed.  Hopefully his positioning will continue to improve and he'll be able to adjust to that.  He only just turned 26 and will likely continue to improve for another couple years.  I expect Greene to continue to be one of those guys that opposing teams won't notice, while making 3 or 4 plays that will add to his legend.