Waiting for the other flipper to fall

Share All sharing options for: Waiting for the other flipper to fall 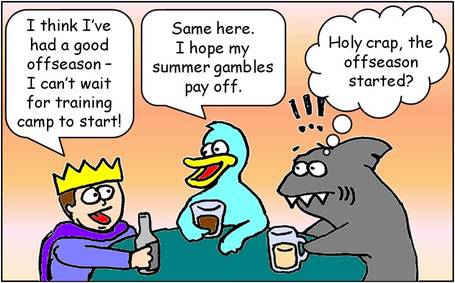 Hey, what do you know? My scanner still works!

I was inspired today by a good Sharks post by That'll Cheech You over at Fear the Fin, reminding us of where the Sharks currently sit contract- and cap-wise.  It's been a much quieter offseason than anticipated thus far in San Jose-land, and while there's many months before the puck drops on 2009-10, the fact that the first-week-of-July spending frenzy is over is significant.  By now, nearly all of 30 teams have committed contracts to fill their budgets and rosters, and seemingly nobody is eager or able to take on significant salary.  Whatever trade options GM Doug Wilson may have had at the draft (and we can only speculate there) are now fairly diminished.  How it affects the Sharks going forward?  Remains to be seen.

Still, it was only one summer ago that the Ducks sat in the Sharks' position -- over the salary cap ceiling with most of the league's summer spending done, trying to unload a useful veteran in Mathieu Schneider.  While Schneidermayer carried a significant salary for one more season, he had demonstrated an ability to outscore easy competition and was a useful power play pointman -- I initially thought there'd be a hefty return for a year of his service.  But as "spending" summer turned to "waiting" summer, the value of Schneider did shift substantially.  Nobody was out to do Brian Burke any cap-managing favors, and Atlanta finally bailed out the Ducks with just days to spare.  The return?  Ken Klee -- played 3 games for the Ducks before being shipped to Phoenix (where the Ducks still paid half his salary).  Brad Larsen -- never played for the Ducks, having an eternal injury of some sort.  Chad Painchaud -- I've never even heard of this guy; frankly it sounds made-up.

My point being -- it's not fun to be in the "shed salary" position at this point in the offseason -- certainly we're nearing the point where optimistic trade returns may be out of the picture.  Now it's entirely possible that Doug Wilson has more friends in the GM circles than Brian Burke did, and San Jose is still a great team with a lot of superstars -- I don't think the Sharks are screwed by any means.  But the later this summer prolongs, the less bargaining power Wilson is likely to have -- could be that the Sharks have to give away players for junk at some point.  Here's hoping.