Last Season:  I can't figure out if I like Jarret Stoll or if I don't like him.  Most everyone else on the Kings, I have a pretty strong opinion about.  Anze Kopitar?  Love.  Ryan Smyth?  Hate.  Drew Doughty?  Want to have his kids.  Raitis Ivanans?  He's a very nice man and I'm sorry I ever criticized him.  (Please don't kill me, Raitis.)  But Stoll, I can't figure out.  He's alright.  He has a nice shot and he's a fantastic special teams player, but he's pretty much worthless at even strength and he takes too many penalties.  I usually weigh everything and then end up saying, "Whatever, he's fine." 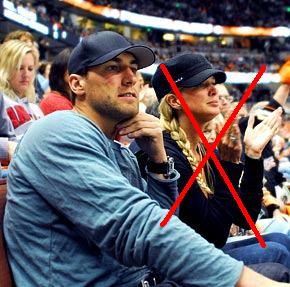 Stoll is usually listed as the 2nd-line center, but in reality he's the 3rd most important center on the team.  Kopitar scores, Handzus shuts down, and Stoll usually does battle with whatever's left.  For that role, he fits pretty well.  Stoll's known for his shot but he's really more of a playmaker.  He's kind of like a lesser Ryan Getzlaf in that way: both have fantastic shots but are more comfortable passing the puck off.*  Stoll was at his best last season playing alongside Kyle Calder (guh) and Dustin Brown, where they banged along the boards and played a north-south game.  It doesn't seem to fit with Stoll's style, but he was 25th among forwards in  hits and he had 45 blocked shots last year, so I guess he does play pretty rough.

*How does that happen?  Do guys like Getzlaf grow up passing and then develop their shot later as they get bigger?  Is it just ingrained in his DNA to pass, just like it's in Kovalchuk's DNA to shoot?  It's strange.

Stoll's true worth comes on special teams and in the faceoff circle.  Stoll was 2nd among all forwards on the team in penalties with 29 minors, and I can't tell you how many times he made me mutter, "Goddammit," when he hooked some forward through the neutral zone.*  When he wasn't in the box, though, Stoll was our best penalty killer, even better than Michal Handzus.  The two are both great at faceoffs and are adept at getting their sticks in the lane; they, along with Sean O'Donnell, helped the Kings improve their penalty killing last year.  Stoll also was 2nd on the team in power play goals, utilizing his big slap shot from the point to create opportunities.  And faceoffs, holy shit is Jarret Stoll good at faceoffs.  He was at 57.9% on the year, leading all Kings' centers.  I don't know how important faceoffs really are (I suspect they're probably overrated), but it's better than not being good at faceoffs, right?

But looking at all that, I still can't figure out if I like Jarret Stoll.  He's not good enough to be a 2nd line center, but then again he was coming off knee surgery and could have a Handzus-esque jump next year.  He's kind of tough but he prefers to pass, he's a center but he plays a game built for a winger, he dumped Rachel Hunter in an e-mail and that's fucked up but also hilarious...I don't know what the hell.  Whatever, he's fine.

The Future: Jarret Stoll is what Dean Lombardi calls a "bridge."  He's not a part of the core of the team, he's a guy that holds a place until someone is ready to jump up and take his spot.  He'll occupy his current position for 2 more years, then "drop down" and take Handzus' spot while hopefully Brayden Schenn or Andrei Loktionov are ready to assume his old place.  Then he'll hang out for another year until Trevor Lewis takes his spot.  For next year, I think we'll see a much more comfortable Jarret Stoll out on the ice.  He won't have Rachel Hunter distracting him, his knee will have had another year to recover, and hopefully we'll see a little more creativity out of him.  Hell, I might even end up forming an opinion about him.