This is One Step Above LARPing

Share All sharing options for: This is One Step Above LARPing

Alright, so James is coordinating this thing where people re-draft the league. It's really nerdy and I'm embarrassed to be doing it, but doing hypothetical exercises like this is my kryptonite. When I was a kid and I was playing with my GI Joes or Teenage Mutant Ninja Turtles, I would spend like 2 hours setting them up, hiding them in sock drawers and putting the appropriate good guys against the appropriate bad guys, then wouldn't have time to actually, you know, play with them. I'm ashamed.

I'm picking 17th in this thing, so most of the top guys were taken. Now, they're going to use a couple different things to evaluate who has the best team, but I'm only focusing on one of them: a single season simulation of NHL '10. I want to win. I am going to win. How am I going to win? By exploiting some of the deficiencies in the rating system. We all know that EA Sports tries as best they can, but there are always certain players that get a little bit of a boost. Guys that are well-known are going to be better than young guys. Guys that had inexplicably great years are going to get rated too highly. (Remember when Jonathan Cheechoo scored 56 goals and then you couldn't play against the Sharks without him skating down the side and then picking the top corner every time?) Big guys can destroy little guys, nevermind if they're actually good at hitting. With that in mind, I present my 1st pick: 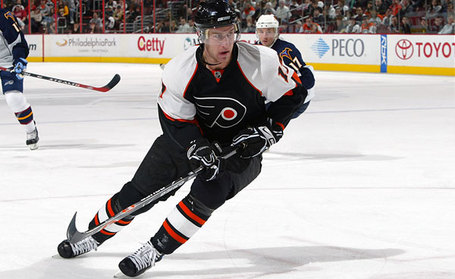 This was a tough decision for me, because Mike Richards, Joe Thornton and Tim Thomas were all available, but while Richards and Thornton are better than Carter in real life, I think Carter will be better in the video game. He's one of those guys that you see among the league leaders with 50 goals in 60 games and think, "Really? That guy?" Plus, we're using a cap and Carter makes less than the other two. Carter's going to light up the NHBL (Nerd Hockey Blogger League) and I will win.

(Don't worry, I'll keep this to the FanShots from now on. If you want to follow on and then bug me with advice, feel free.)