You Win This Round, Ducks

Share All sharing options for: You Win This Round, Ducks

So the Anaheim Ducks have purchased a bunch of the local hockey rinks in Orange County and re-naming them "The Rinks" to give them a common brand.  They have 3 rinks right now: Anaheim Ice (where the Ducks practice), Corona Inline, and Huntington Beach Inline.  I play at Huntington Beach (formerly called Coast 2 Coast), and used to love the place.  The rinks are kind of short but otherwise they're excellent and always make for fun, exciting games.  I lived in that place.  I knew every dimension in that rink, every dead spot in the boards, what I could and couldn't get away with for each referee.  It was my home. 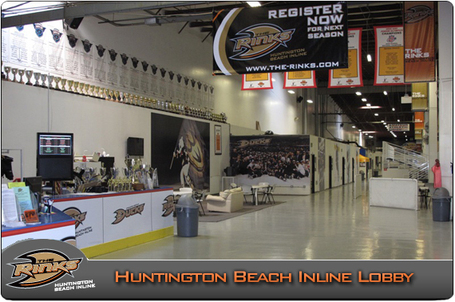 Then, a couple weeks ago, I walked in to a horrific site.  My once proud rink was now littered with banners, giant banners of Anaheim Ducks.  Right when you walk in the first thing you see is a huge picture of the Ducks celebrating their Cup victory and Wild Wing doing a poor Bailey impression.  In between each locker room there is a picture of a particular Duck (Perry, Ryan, Scott Niedermayer, etc.).  They've taken my home rink and turned every game into an away game. 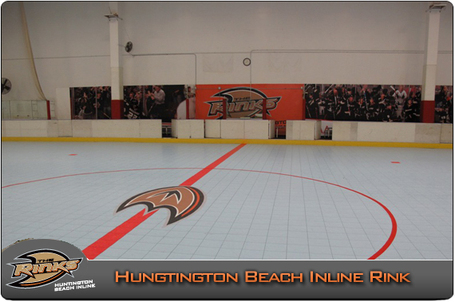 The worst change, though, is that they've put up a large backdrop of cheering Ducks fans right behind one net.  They're all celebrating, like they're already enjoying the misery I will soon feel.  Whenever I play on that side, I can feel the Ducks fans jeering me.  "Ruuuudy.   Ruuuudy.  You suck!"  It's haunting.  Since that backdrop went up, I know I've been giving up twice as many goals on that side as I do in the opposing net.  People think I'm crazy, but I swear the backdrop changes the lighting in the rink and messes with my angles.  I can't get comfortable.  I might have to switch rinks.  I can't prove that the Ducks did all this just to screw with me, but I'm not ruling it out.