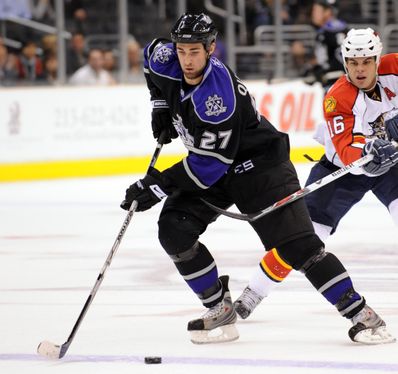 Last Season: Well, that worked out pretty well.  The Kings get Kyle Quincey for free, use him to stabilize their 2nd power play unit for a year, then trade him and some scraps for the left winger we've needed for while.*  Kyle Quincey was found money.  He was exactly the type of player a bad team needs to get good.  Utilizing assets like Quincey is a great way to become a good team in the NHL.

*I'm rationalizing the trade now by repeatedly reminding myself how much the Kings needed someone to play on that left side.  Also, I've started referring to Ryan Smyth as Captain Cocknose in my daily correspondence.

Kyle Quincey became available at the beginning of the year because the Detroit Red Wings felt that Quincey was a little bit of an injury risk and also because they had Derek Meech and Jonathan Eriksson ready to go on defense.  I don't want to say it was a bad decision, so all I will say is that Kyle Quincey outplayed Brad Stuart this year and Brad Stuart is making $3.75 million dollars while Quincey makes $500,000.

Quincey walked onto a team that was badly in need of defensemen.  At that point, the Kings had an 18-year old rookie in Drew Doughty, an aging greybeard in Sean O'Donnell, a guy that had never been more than a 5th defenseman in Matt Greene, and the guy that was supposed to soak up most of their minutes, Jack Johnson, was out for a while.  Quincey immediately began playing upwards of 24 minutes a night in some games and played in all situations: power play, penalty kill, and even strength.  He was a godsend because he allowed the rest of the defense to do whatever they did best.  Quincey is a guy that can do whatever is needed of him and that is surprisingly rare in the NHL.

Quincey's ice time decreased once Jack Johnson came back from injury and decreased further as the Kings dropped out of contention and Quincey's back flared up.  He mostly lost his penalty kill time and was a 4/5 power play guy by the end of the year.  Quincey did a great job on the power play, teaming up with Jarrett Stoll and Alex Frolov to give the Kings one of the best 2nd units in the game.  They were a big reason the Kings had a respectable power play this season, owing much to Quincey's low, accurate shot.  (Ironically, Quincey would have benefited most from the acquisition of Ryan Smyth and vice versa.)

Overall, Quincey is not as good as the minutes he played last year.  He is a good player, but he's not a guy that should be getting the 2nd most minutes on defense.  But that's OK, mostly because he's not on the Kings anymore.  I will have fond memories of Quincey because he swooped in, played great for about 30 games when the Kings really needed it, and then got out before the bloom was off the rose, so to speak.  If he had stayed with the Kings, Quincey would have likely played about 16 minutes a night and been our 2nd unit anchor on the power play.  Not bad, but probably not what he would have liked.  Now he gets to go to a Colorado team that could really use him and he'll likely play a lot.  Good for him.

The Future:  Kyle Quincey has a place in the NHL.  Where, I don't know.  His gift to play in every situation is kind of a curse, because he doesn't have one dominant skill that he can use to sell himself.  GM's look at filling needs and they like players that fit their little boxes.  Quincey doesn't, really.  He doesn't do anything great, but he does everything fairly well.  Quincey seems destined to play big minutes on teams that miss the playoffs.  I think he'll do a great job in Colorado and will likely play the same 2nd fiddle to Jon-Michael Liles that he did to Drew Doughty.  After the season, he'll get a nice deal and will be a disappointment to whatever team signs him because he's not quite good enough to be a 1/2 defenseman in the NHL.  No matter what, though, I think Quincey will always receive a warm welcome in LA for what he did last year.