Scary New Territory for the Ducks: Surviving the Post-Pronger Curse

Share All sharing options for: Scary New Territory for the Ducks: Surviving the Post-Pronger Curse 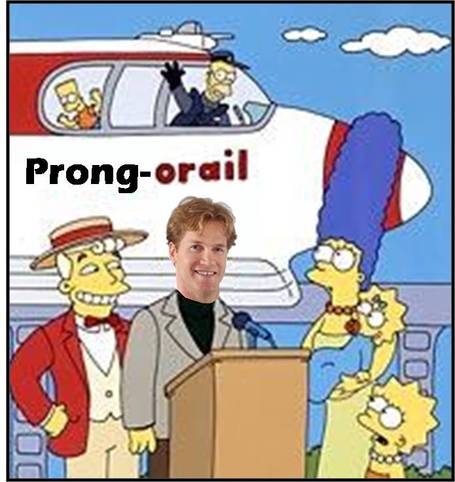 Per my chosen Simpsons metaphor, the problem with the "Prong-orail" isn't so much about the
excitement of that first town hall meeting, but rather the hockey devastation that occurs afterwards.

Like a lot of Ducks fans, the aftermath of the Chris Pronger trade has me worried.  Don't get me wrong, I haven't soured on the return on the trade itself -- I'm still very enthused about that (plus with Pronger's reported extension, I think he was moved at exactly the right time) -- it's just that as I've paid attention to how other NHL cities have coped with the departure of the Elbowed One, I've developed a dread for the day when the Prong-orail would leave Anaheim's station.  If you look at the table below, you can see the aftermath of destruction that Pronger has left in the wake of his three previous trades -- the three-year outlook isn't rosy, to say the least.

Not one playoff appearance among them -- the Blues finally qualified in Year Four.
Note that Hartford's seasons were played in a 13-team eastern conference.

Now there's a mix of reasons for the woes of the post-Pronger Whale/Blue/Oilers -- some mismanagement and bad bets in creating their rosters, injuries certainly had their effects -- but no city seemed to successfully "get over" Pronger's absence.  In fact, the three cities combined have zero combined postseason wins since Pronger stopped wearing their jerseys.  Curse?  Coincidence?  Crisis?

Tough to say -- but now Anaheim joins the list of former Pronger employers.  The Prong-orail has left a path of postseason wasteland in three previous cities: can Anaheim avoid becoming the fourth in the row?  Some meandering thoughts after the jump.

Now I'm not really sold on the notion of any real franchise curse, but the fact remains that next year's blueline will be radically more ordinary for Ducks fans used to the reassuring minutes of Pronger and Beauchemin.  Past Captain Scott, suddenly there's a depth chart of varyingly new faces, none of which I've watched for a full season -- Whitney, Wisniewski, Sbisa, Brookbank, Mikkelson, Festerling.  It's going to be really interesting to see how minutes shake out and how the group manages -- and by "interesting", I probably mean a mix of 80% "scary" and 20% "exciting".

The blueline's "return to mortal" reflects the tightened belt being felt throughout the roster.  Unlike Burke, Barstool Bob has to work with what might be the fifth-lowest spending budget in the league next season.  Recall, btw, the post I wrote back when Brian Burke left the team, when I pointed out three Burke moves we should be critical of (the Giguere contract, the Bertuzzi buyout, and becoming a salary cap ceiling team) -- right now those seem the obstacles that may prevent further improvement on the blueline, but we shall see.

My Kings buddy tells me that by trading Pronger, the Ducks have fallen out of his classification of "Cup contenders", and he may be right -- we don't have the blueline to win the 2007 way.  Where the Ducks may win, if the lucky green shirt has its say, is in their forwards.  Dare the Ducks try to become outscorers through offense? 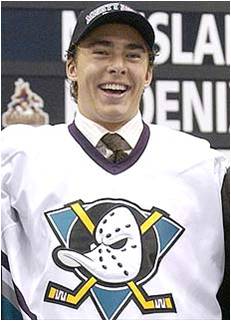 On paper, the return on the Pronger trade in 2009 mirrors that of the 2006 Pronger trade -- down to the very same Joffrey Lupul.  However, that's oversimplistic -- it wasn't the same Pronger being traded (4 yrs tied up vs. 1 year), nor was it the same Lupul (first salary raise vs. second salary raise).  When Lupul left us, he had yet to make his first million-dollar-per-year salary -- now he comes back at a cool $4.25M, fifth highest on the current payroll.

Grumbling Ducks fans are right -- it's not going to be a fabulous contract, assuming Lupul's flaws still exist.  His shot's great and he's useful on the power play, but he definitely needs backchecking help and won't really be carrying any linemates.  Still, salary did have to come back in the Pronger trade -- the days of dropping Fedorov-sized deals for nothing is over -- and even though the contract and the player aren't perfect, I still think Lupul improves the Ducks' offense when played correctly, and as I recall, Carlyle did it pretty well.

If Lupul can play well again with Todd Marchant like he did in 2006, then that helps spread offense down to the Ducks' third line, something that hasn't been done since 2006 (no offense, Sammy, Travis, & Rob).  Or if he can ride along with Getzlaf & Perry, that could free up Bobby Ryan to help on another line.  Lupul definitely wasn't the prize of the latest Pronger trade, but that's not to say that he doesn't quickly improve Carlyle's offensive options, and it's nice to see a familiar loopy grin again. 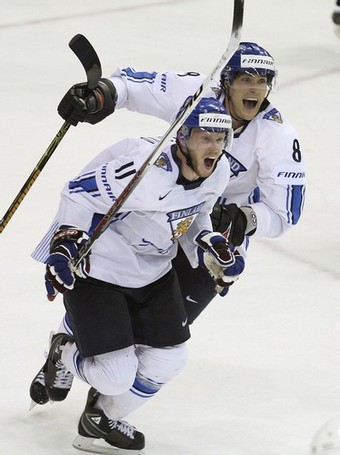 SUOMI!  Picture snagged from Eyes on the Prize.

Sheer awesomeness.  I have been a Team Finland fan since Nagano -- basically because of the charismatic pull of Teemu's nationalism -- and I cannot wait for these two to join forces for Team Anaheim.  With Koivu, there is simply too much to talk about -- the cancer battle, the Montreal captaincy, the little-man production, the selfless passing -- Saku oozes heroism and class.

Add to it the fantastic trend of accepting a smaller deal to come to Anaheim, and Koivu represents to me a lot of hope at surviving the post-Pronger curse.  He'll work well in the offensive scheme -- a 1a center behind Getzlaf, a natural fit with countryman Selanne, and perhaps a move that could send Getzlaf back to the point on the PP.  And to see Selanne and Koivu battle together one last season -- both for the Ducks and for Finland in the upcoming Olympics -- will be worth my price of admission alone.  Two gloried-and-storied veterans and best friends -- I just get the feeling that this is so fitting for Teemu, the way he probably would want to retire.  And I can't wait to see it.

I will maintain always that despite any sass I direct at him, Brian Burke was an awesome GM at building the Ducks.  Even aside from his cup, probably the best thing that Burke did was coming out of the lockout, he built a four-year-expiring salary plan.  Nearly every contract Burke put on the books (including his own and Carlyle's) came to a concurrent halt this summer, and it provided his replacement GM with incredible flexibility -- now with four years' salary cap and new rules experience, Bob Murray could construct the team as he saw fit.  Burke's departure, while the timing may have irked some, was well-designed -- Murray took over at the point when it was time to decide which contracts needed extending.

So now we enter the era of Barstool Bob -- and I tell you, so far I'm with him on every move.  Trading Pronger hurts in the short-term for sure, and Beauchemin, Kunitz, Pahlsson, and others -- these guys will certainly be missed.  But they key in this salary cap game of hockey isn't always about having the best players; it's about having the best contract values.  And I can be grateful that for a lot of former Ducks, we got to enjoy them while they were bargains.

Are the Ducks due for a curse?  Perhaps -- nothing is set in stone like it was for us in the NiederPronger era.  But it's exciting times -- the transformation of a team that was successful in one area of the game to one that tries to be successful in another.  Frankly, and I don't know if I've felt this since the Pronger trade, I can't wait for training camp this year.

Hold on to them hats and glasses, because the Prong-orail has left the station.  God help us all.