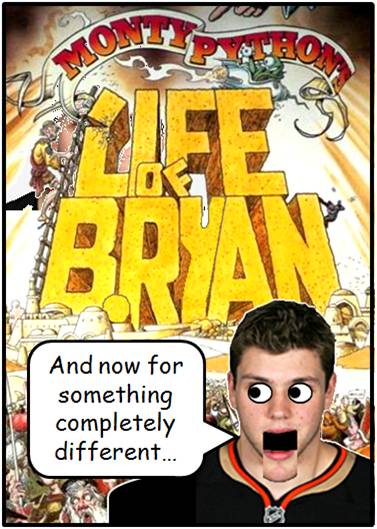 Yeah, I'm mixing Monty Python metaphors here. But I do like the hinged jaw.

While I did start by profiling Ryan Getzlaf and Corey Perry for this "Season Review" series -- they are indeed Anaheim's established first-line stars -- let's not forget that when asked to pick last season, I instead selected Bobby Ryan as Anaheim's Hart Trophy winner. Ryan, unlike Getzlaf & Perry, was able to put up serious outscoring numbers with a variety of linemates -- most of Getzlaf & Perry's real success came when Bobby Ryan got inserted on their line.  It's not impossible that Ryan might not be the best offensive star of the three, and perhaps by as early as next season.

Just to further emphasize the B-Ry impact, I also went to another source -- HockeyAnalysis.com's player breakdown, which looks at how players performed at even-strength last season playing with and without a specific teammate, in this case Bobby Ryan.  I think the stats are for regular-season only, which is probably fine -- I suspect by the end of the playoffs B-Ry was playing injured anyways.  The last three columns show how much scoring rates improved for each player when Bobby Ryan was put on their line (note: you may have to click on the extended post to see the full table).

Takeaway: of the seven forwards with whom Bobby Ryan played the most even-strength minutes with, he improved every one of their offensive and goal-differential results, in many cases substantially.  He was able to take minutes of non-factors like Brendan Morrison, Ryan Carter, and George Parros (!), and turn them into productive minutes -- granted, in those cases he probably didn't see the opposition's best defenders, but that doesn't make the results less valuable.

Next season, it's a real inner debate for me whether it makes sense to keep Bobby Ryan as wingman on the Getzlaf-Perry line or whether he's more valuable improving results of depth players -- he can turn that top line into a nearly-unstoppable force, but if he could propel lesser lights into scoring lines, that's a big gain for the Ducks also.  One area in which I am decided, though: I think the days of limiting Bobby Ryan's success (and thus limiting his next salary) are over -- this year I think the Ducks should give Bobby Ryan every chance to dominate at the NHL level.

Longtime readers should know that I've had a regular campaign against the playing time of Bobby Ryan, as he is due a sizeable first raise next summer, and the more successful his career-to-date becomes, the more his next salary cap figure is likely to be.  To that end, I think the Ducks have done a fabulous job of keeping this kid in the cupboard -- even his Calder campaign year, he spent a good chunk of time in the minors (note: same thing happened to Getzlaf & Perry -- helps take the pressure off, I think).  I'm also thrilled that voters liked goaltender Mason so much -- Ryan should be slightly more affordable as a Calder runnner-up.

But I think the team has done all it realistically can do in preparation for Ryan's payday -- Ryan will still earn a significant raise, as he should, unless somehow the wheels fall off his cart this season.  And that's fine -- I keep hopeful it should be a reasonable deal, though.  Working for the Ducks are a couple of things -- for one, Getzlaf and Perry each have identical-cap-hit contracts that set sort of a natural team ceiling on forwards -- $5.325 M.   I think Ryan would have to seriously outperform both Getzlaf and Perry in order to ask for a higher cap hit.  Also, with the cap stagnating or falling, at least he's not negotiating in a boom market.

So I guess what I'm saying is: in previous years, I was in favor of limiting Bobby Ryan's chances at NHL success -- keep him in the minors, put him on checking lines, keep him off the top power play, etc., etc.  It was good for his next contract and I think good for his overall development.  But this year, I'm flipping a u-turn philosophically.  I say this is the year to give Bobby Ryan every opportunity to succeed and have a monster year.  Dare this kid to outperform Getzlaf & Perry (which could become impossible if they are full-season linemates), and see if he can't earn something north of the $5.325 M measuring stick -- if he can do it, it's very likely that Anaheim has a monster season as well.

It's your money year, B-Ry.  I think the bar has been set and the shackles are off, let's see how big an impact a full year of unfettered awesomeness can really make.