Jesus, I forgot how many great glove saves he made last year.

Last Season: I can't  figure it out.  I know there's a reason I shouldn't assume that Jonathan Quick will be a good goaltender next season, but I can't find it.  Quick, who joined the Kings in late December over the more highly-touted Jonathan Bernier, was exceptional last year.  He has great numbers for over more than half the season, there's nothing stylistically wrong with his game, and he seems like a good guy that loves pressure.  What's not to like?  I don't know, but there's must be something, because no one else seems to have much hope for him.

At first I thought it was that his numbers were inflated by playing in front of the Kings' defense, but I don't think that's the case after running some numbers.  The Kings were much better at stopping shots before they got to the goaltender last year, moving their shots allowed per game from 32 shots per game (29th in league) to 28.1 shots per game (4th in league).  The team was done in more by a struggling Jason Labarbera and Erik Ersberg than anything else early in the season, and that problem was resolved by Quick at the midway point.  You would think that Quick benefited from the Kings' solid defensive game, except that the Kings' ability to prevent shots kind of disappeared after Quick took over.  Quick faced an average of 29.6 shots per game, which would put him more towards the middle of the pack amongst goaltenders.  The Kings kept up their solid overall defensive play because Quick took over, not because of their defense. 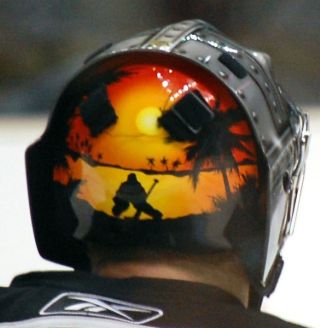 Then, I thought maybe it was because he was new and teams would eventually figure him out.  I think that's what happened to Erik Ersberg.  Ersberg joined the Kings' organization in 2007-08 and put exceptional numbers for the Kings in 14 games at the end of the season (2.48 GAA, .927 SV%); this led many Kings' fans to anoint Ersberg as the Kings' goaltending savior coming into this season.  Ersberg then proceded to put up poor numbers and was only saved the wrath of fans because their knives were already embedded in Jason Labarbera.

Could the same thing happen to Quick?  Maybe, but I don't see much similarity between their situations.  Quick put up his numbers over a longer period of time and is bigger, more athletic, and faster than Ersberg.  The only things I don't like about Quick is his tendency to over-commit (leaving him out of position if the puck's angle changes) and the way he holds his head.  He kind of scrunches his shoulders instead of holding it up high, which I think makes it easier to screen him.  But then again, Tim Thomas does the same thing so what do I know.  The difference between Ersberg and Quick is that you can watch Quick play and see that the numbers he put up were reasonable; you can't say the same thing with Ersberg.

And then there's the fact that I've seen this story before.  I've seen Quick, and Ersberg, and Labarbera, and Garon, and on and on and on, come in and put up good numbers near the end of a year, get my hopes up, and then proceed to suck the next year.  It's happened so many times that I don't know if I can trust any goaltender to put my fears to rest.  Hopefully Quick can be the first one to do that.

Jonathan Quick had the 3rd best goaltender season for a rookie in the league last year, behind Steve Mason and Pekka Rinne.  I don't hear the same questions surrounding Mason and Rinne that I hear around Quick, despite the fact that Mason is 21 and Rinne's performance last year is not really in line with his career numbers.  When Quick was named to the Olympic tryout roster, he was mostly met with, "Who?"  I guess I don't understand it.  Maybe the fact that no one else is comfortable with Quick in goal for the Kings is making me uncomfortable.  What do you think, should the Kings be worried?

The Future: Quick will likely enter the season as the #1 starter and will probably give around a 2.5 GAA, .910 SV% performance.  I think that is probably his career projection and will be fine for next year.  The real intrigue is behind him, where a steady Erik Ersberg will be challenged by a high-risk, high-reward Jonathan Bernier.  The best thing that could happen for the Kings would be if Bernier can beat out Ersberg by mid-season and challenge Jonathan Quick for the #1 job starting next year.  If I know Quick, he'll take his game to another level to meet Bernier's challenge and then the Kings are set in goal for the foreseeable future.