Coyote Auction: when you're not sure what to say, draw a cartoon

Share All sharing options for: Coyote Auction: when you're not sure what to say, draw a cartoon 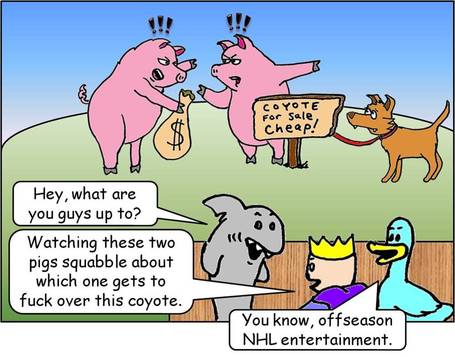 I can use "fuck over this coyote" in a cartoon so long as I post after midnight, right?

There's actually very little I want to say about the courtroom-drama Phoenix Coyotes saga-turned-auction, except sucks for sure to be a Desert Dog fan right now.  Most of the issues are way outside of my grasp (at least with any semblance of speaking authoritatively), but at the heart of it all is goddamn money, the same blasted thing that cost us the 2004-05 NHL season, and for sure it's discouraging to see it resurfacing again so soon.  Whatever the fuck is going on in Glendale, the focus is certainly not about the on-ice product, and that's no good for the 'Yotes fan no matter where the team ends up.

Sucks for sure -- make sure to hug a Coyotes fan next time you see one.

If you'd like some real handle on the legal proceedings and how it could impact the league, be sure to follow blog-cyborg James Mirtle as he follows the Dark Phoenix Saga (hopefully the X-Men didn't copyright that term).  For a 'Yotes-fan perspective, why not serve out your penalty at Five for Howling?  And for sure, feel free to leave your own takes in the comments -- don't worry, I'm still very hazy on what the league's bid actually means (maybe the Coyotes won't get fucked over, who knows?).  I mostly brought it up as an excuse to draw a SleekToon and end another lazy streak.

Damn, summers are long.  Thank god for little league baseball -- apparently few things cheer me up like a kid crying on TV.