Season Review: As good as it Getz

Share All sharing options for: Season Review: As good as it Getz

Hey, BoCers, sorry for the break in posting, but now that the miracle Angels have finally lost a game, I figure it's time to get my act together and start writing about hockey again.  Like Rudy's been doing, I thought I'd take a player-by-player look at key Ducks personnel from last year with some questions and discussion about the coming season -- and I'm starting with the balding sensation at center (the one not named "Koivu").

Last year was another step forward for Ryan Getzlaf, re-raising the ceiling of his projected performance and definitely taking prominence for the Ducks in their stretch and playoff run.  His success with linemates Corey Perry and Bobby Ryan showed that top teams in the league couldn't shut down his production, even as the centerpiece of a mainly-one-line offense.  Getzlaf's line has a vicious down-low cycle that can wear out the best of defenses -- all three skaters are sizeable puckhandlers and legitimate snipers, and the top line can resemble a power play for some shifts. Then again, it's probably important that we remember the Ducks of the first six games of last season, and how badly the team sucked when none of its offensive stars could produce at all.

The questions of "how good is Ryan Getzlaf" I think is largely answered -- when he's playing full throttle, Getzlaf is about as good as they come in the league -- size, shot, vision, and drive.  Of course, it's definitely worth mentioning Getzlaf's downside -- like linemate Perry, he's never demonstrated much discipline nor remorse when it comes to bonehead minor penalties that can and do hurt the team.  But even that has a flipside -- Getzlaf is very "heat of the moment".  He can certainly let his temper get the better of him, but it's also that hard-headed aggressiveness that makes him effective offensively.  An involved Ryan Getzlaf is much preferable to an emotionally detached version.

The bigger question for the Ducks (aside from "how good?") is really: How important is Ryan Getzlaf, and how screwed will the Ducks be if his game goes south next winter?  He's pretty much secured a spot on the top offensive line and a pivotal position on the top power play -- if those key scoring minutes were underwhelming last season, the Ducks were largely screwed, as Teemu Selanne was the only other source of regular offense.  This coming season?  Offensive depth will be deeper, so Getzlaf won't necessarily have to carry the team like last year.  But, as I'll attempt to show after the jump, last year's success pattern is this: As Battlestar Getzlaftica goes, so goes the fleet. 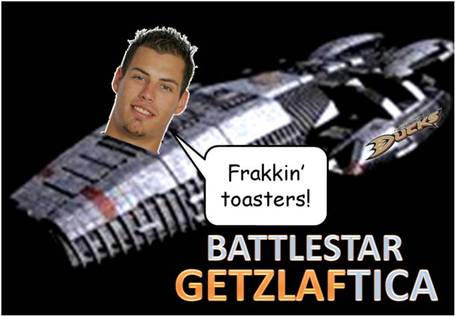 Action stations, set Condition One throughout the fleet.

Getzlaf, by the way, just went through a sports hernia surgery which hopefully has him back in time for the season opener, and if it's anywhere near as successful as last year's trip to the dentist, then it's definitely a welcome surgery.  Hopefully it's nowhere near the Pahlsson waiting game, though -- that was aggravating.

Now for the silly math-y part of my post: a split of Getzlaf's offensive production split into four segments of the season.  Here's how I split up the Ducks' season and postseason for this analysis:

Segment A represents a silly stretch of opening games where the entirety of Anaheim's offensive players didn't show up at all.  It's really a throw-away segment of games, though it is worth asking the question what triggered the awful start for the Ducks -- hopefully the answer really wasn't Getzlaf's tooth decay, but who knows?  After the dental fixings, Segment B represents a much stronger stretch for the Ducks -- 25 games of pretty steady winning.  The cutoff between B and C is sort of arbitrary date, December 15th, but sometime around there things began to sag for the Ducks.  Segment C saw a lot of 3-4 defeats and a general letdown in consistency, and culminated at the Sharks game in mid-March where Spade and I watched the Ducks' playoff hopes fall down the drain at the hands of Travis Moen.  Or so we thought.  Segment D is where the Ducks began their critical run to the playoffs and the two rounds thereafter -- as they say, suck it, Moen.

So in short form, Segment A -- ridiculously awful.  Segment B -- good stretch.  Segment C -- bad three months.  Segment D -- great stretch, particularly because it occurred in must-win situations generally against top-of-the-league opponents.  With that general season breakdown now established, here's some of Getzlaf's even-strength and power-play numbers broken down for each segment:

So the easy takeaway from this short exercise is that last season, Getzlaf drove the bus.  When he was outscoring and producing at a superstar rate, the Ducks enjoyed great success (with caveats galore -- we'll talk about goaltending a bit later).  When he was invisible our outscored, the team suffered.  The notion of outscoring is big here, because even in segment C, Getzlaf appeared to be OK -- he did score 36 points in the 38 games.  But Getzlaf's defensive game has never been terribly stellar -- his line was allowing goals from opposition stoppers at even a higher rate than they were producing, and the team didn't have the depth to overcome that nonproduction.

Segment D, though, that's where Getzlaf was particularly a star, because so much of it was in must-win territory.  If that Getzlaf could be bottled and put out on the ice for 82 games next season, I know I'll sleep a lot easier.

There's more to talk about with Ryan Getzlaf for sure -- should the guy be shooting more often, or are we best off to leave a good thing alone?  Should Coach Carlyle be utilizing the two best wingers he has on Getzlaf's line, or is it better to spread offense and let Getzlaf carry a passenger or two?  With the absence of Chris Pronger, is Getzlaf more valuable next year as a power play pointman or a power play centerman?

Regardless, we know that whatever fate befalls the Ducks next season, Getzlaftica will be front-and-center leading the charge.  And I can't frakking wait.