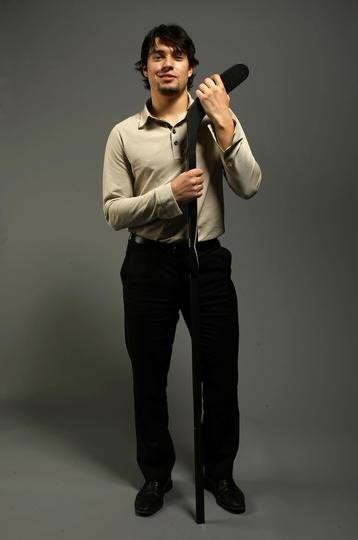 Note: I'm going to do my best to be completely objective in regards to Doughty and not fawn all over him like I'm apt to do.  It's going to be hard but I think I can do it.

The Future: I imagine Doughty will start the season with Sean O'Donnell next season, since they know each other and have proven chemistry with one another.  That doesn't mean they'll play similar minutes, however; Doughty will probably play around 10 minutes of even strength with O'Donnell and then another 6 or 7 with various other defenseman.  That's what #1 defensemen do.  I think we'll see a little more offense out of Doughty next year, since every one of his goals was him having to create it himself.  I get the feeling no one on the Kings knew how to play off Doughty since what seemed obvious to him hadn't revealed itself to the rest of the team yet.  Hopefully guys will be able to predict what Doughty is about to do a little better and play off that.  I don't think 40+ points is out of the question.  There are a few things Doughty needs to get better at: improving on the power play (and that should help because he won't have Peter Harrold next to him), getting stronger, and jumping into the play a bit more.  Overall, though, I predict greatness for young Doughty.  And I will, at some point, write a sonnet about him.