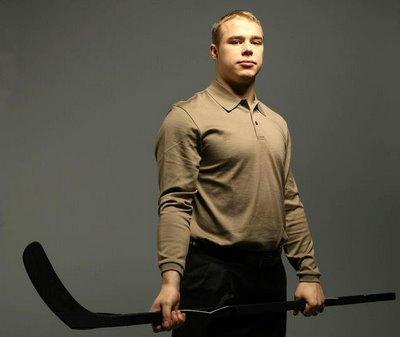 This is my 2nd favorite clip on the internet, behind this one (NSFW).  I want this to play at my wedding.

Last Season: You can separate Dustin Brown's season into 2 parts: before his daughter was born, and after.

Brown misses 2 games for the birth of his daughter, who is born 8 weeks premature

The Dustin Brown before his daughter was born was probably the best all-around forward on the team behind Alex Frolov.  Brown took on a new role this season, one in which he was expected to create offense, not just finish it.  Separated from his ol' pal Anze Kopitar (who was stuck in a malaise for most of the season), Brown was paired for much of the season with two players that were inferior to him.  Brown responded by shooting.  A lot.  Brown finished 8th in the league in shots taken,* a rank that does not match his abilities.  Kings' fans gave Brown a lot of grief for it, but what was he supposed to do, pass it to Kyle Calder?  Terry Murray's system puts all the defensive pressure on the left wing and center, leaving the right wing responsible for the initial offensive push basically all by himself.  Brown could stand to learn a little from Wayne Simmonds and push the puck to the corner a little bit more, but by and large his play was effective, effective enough to get him an All-Star nod (as undeserved as that may have been).

*#7?  Jason Blake.  It's a good thing I don't watch Maple Leafs games otherwise I think I'd hate that guy more than I hate Brian Willsie.

The greatest part about Dustin Brown's game, of course, is his ability to take penalties.  According to Behind the Net, Brown drew 63 penalties last year, 20 more than the closest player.  I've said it before, but one of Brown's best attributes is his ability to dive without making it look like he's diving.  A guy like Corey Perry will dive by throwing his head back and grabbing his vag, but Brown will dive by letting his feet get carried in whatever way the defender is pushing them.  It's not even so much that he's diving, it's that he's not fighting the defender to stay up.  Brown has fantastic balance (as evidenced when he's putting some guy on his ass), but his ability to turn that balance on and off is amazing.  Brown used this ability, along with his newfound love of shooting, to put together a fantastic 3/4ths of a season.

But then Brown's kid was born and everything went to shit.  I'm not sure how much of an impact that played into his late-season slump, especially while he was playing, but I could see how it could impact every other part of his life when he's not in the game.  Brown did seem distracted and frustrated on the ice, which served to compound upon itself until he probably deserved to get benched by the last few games.  (Of course, he's not mercurial or Russian, so he gets a pass.)  I imagine it was probably the most difficult period of Brown's life: his wife just gave birth, his kid is in one of those little incubator things, and he's struggling to lead his team at the time they need him most.  Given everything that happened to Brown at the end of the year, I'm prepared to consider the pre-birth Brown the real Brown.  Next year will be interesting, however, because it will be the first year that Kings' fans won't give Brown a pass.  If he struggles again, I imagine the wails will be deafening.

The Future: Dustin Brown is the 24-year old captain of the Los Angeles Kings and will continue to be the captain for at least the next 5 years.  Brown is interesting because he's a power forward in every aspect of his game except when he has the puck.  When he has the puck, he morphs into Nikolai Zherdev's retarded cousin, for some reason.  I hate to say it, but hopefully Brown takes a page out of Ryan Smyth's book and learns to use his size when he has the puck.  Toe drags are awesome, yes, but not when you do them every single time you come down the ice.

I see Brown's numbers staying about where they are now; not because he'll play about as well, but just because he won't get the same opportunity he did the last few years.  Brown could go up and play with Kopitar again, because they do have proven chemistry together, but I more likely see him playing with Jarret Stoll again along with either Frolov or Moller/Purcell.

At this point, we pretty much know what Dustin Brown will do.  He'll hit people, he'll score goals, and he'll look like Spike from Land Before Time.  There are no real surprises anymore with Brown, which is good.  The next step for him is to take everything in his game and move it up to another level.  I think he can do it.

And Dustin, if you're reading this: try not to have any more kids.  It's really messing things up for me.