Share All sharing options for: Season Review: Rounding Out the Duck Forwards

Forward Summer Sauce: The ingredients are all in place, time to get mixing!

Throughout the late part of this summer, I've been running individual "Season Review" posts for Ducks forwards, and I think I've mostly covered the big players in earlier posts -- Getzlaf, Perry, Ryan, Selanne & Koivu, and Lupul figure to provide the Ducks a lot of firepower; Marchant for sure will be a staple on the stopping end, and on the other end Ebbett faces battle to re-establish himself in the regular lineup.  As for the rest?

Well, now that it's September I've gone the lazy path and lumped the rest of the Ducks forwards in one quick-and-dirty post, with each player getting a couple paragraphs apiece.  It's somewhat by design -- none of these players is scheduled to make more than a million dollars next year, and I'm not sure any of them should be considered "critical" to Anaheim's success in the short term.  I've also included a graphic for each player, though I'll warn you -- at times I went the lazy route (or as we should probably start calling it, the "Sleek Method") -- I've re-used some pics for some and cut corners with some bad puns on others.

I should mention -- so far, the focus on the forwards has been very positive, and it looks to be Anaheim's strength this season.  Don't worry, though.  Now that the forwards are finished, it'll be time to move on to the Ducks' question marks soon enough.  So take a quick jaunt with me as we go over six Anaheim depth forwards (not in any meaningful order), after "le jump". 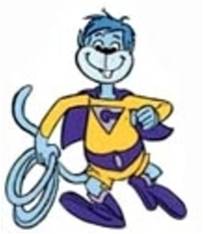 I've had trouble coming up with a nickname that will stick for Nokelainen -- when speaking, I'll most often use "Nickelodeon", but even that's tough to turn into an image, so for purposes of this post I've instead used a picture of Gleek, the blue-space-monkey-pal who accompanied the Wonder Twins back in the Justice League days.

To me, that could represent Nokelainen's opportunity -- the fact that he is the only other Finn on the roster alongside Selanne and Koivu (plus the facts that Nokelainen backchecks and Lupul doesn't) could squeeze him onto the second line with the Wonder Finns. Don't forget in the playoffs, when Carlyle had overtaxed Getzlaf, that he inserted Nokelainen in on the top line, and per recollection it looked pretty good -- even though he's more Marchant than Getzlaf, Nickelodeon can look good alongside some scorers, I think, and an artificial promotion would help spread scoring even further.  Of course, this all comes with only 26 GP in a Ducks uniform (acquired at the deadline for Steve Montador), so definitely more viewing time is required.

Even though Nickelodeon probably won't be in the top six, I think by virtue of his penalty killing he'll be a fixture in the lineup.  So far he's proven a responsible player with some skill, and there's definitely room to grow.  Good deadline pick-up by Barstool Bob. 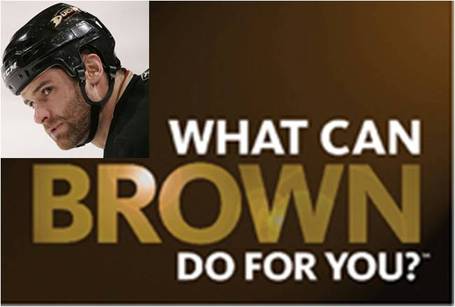 For Mike Brown I'll just stick with the image I created during last year's playoffs, when I was busy defending Brown's hockey existence against a sea of pitchforked Red Wings fans.  To tell the truth, I'm as shocked as anybody at the usefulness of Mike Brown, especially considering the circumstances under which he was acquired (warning: going off memory here, mileage may vary).

You see, the Ducks had swiped a defenseman named Nathan McIver off waivers in Vancouver early last season to play temporarily alongside Chris Pronger (back when everybody was getting an audition to become the next O'Donnell).  He was a costless acquisition, but once he had served his big-league usefulness, the Ducks put him back on waivers to send him down to Iowa.  Theoretically during that day-or-so waiver period, any team in the league (including Vancouver) could have snatched McIver for free, but nobody did so.

But McIver never made it to the Iowa Chops; instead during his flight over he was traded straight-up for Mike Brown, and immediately I had to believe the worst about Brown.  "So Vancouver, who 24 hours ago could have had Nathan McIver for FREE, instead decided to toss in Mike Brown instead?!  That guy must be worth less than nothing!"  Fortunately, that wasn't the case, though -- I don't really know what Vancouver was up to (protecting waiver position?  or does that only matter in fantasy hockey?).  Mike Brown has proved a very useful banger for the Ducks, and will be a prominent shut-down forward, possibly on Marchant's wing. 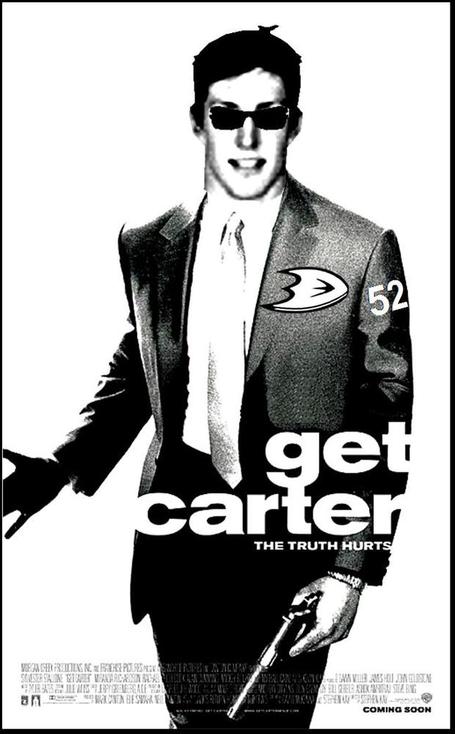 Image re-used from an old Blogger post, back when Carter sported #52.  Ryan Carter has had an up-and-down career for Anaheim thus far, but I have high hopes for his future -- he's always struck me as a down-the-road replacement for Sammy Pahlsson.  He's got great speed and tenacity, and while his size is a bit underwhelming, few guys work harder on their shifts.  Plus, like Pahlsson, he is capable of popping an odd goal every now and again -- he had one in each of the Ducks' playoff rounds, at least.

Of course, a lot of Carter's play this season depends on Carlyle's trust -- it's tough to see Carter usurping Marchant for the key shutdown minutes in the near future, but that's probably ideal for now.  Carter will probably get some fourth-line minutes and secondary penalty killing time (which has mostly been his bread-and-butter thus far), and can work his way into more key situations over the course of the next two seasons.

One nice asset I'll add about Carter: the guy can backcheck for two -- that's why I think he became about the only Duck who played decently with Lazybags Bertuzzi.  If it turns out that some winger doesn't put in a legitimate effort on defense (for some reason I'm looking squarely at you Lupul, but Selanne may qualify also), it may not be a bad short-term fix to let Carter watch their backs -- I think he's much more comfortable playing defensive conscience than leading the offensive charge, anyways. 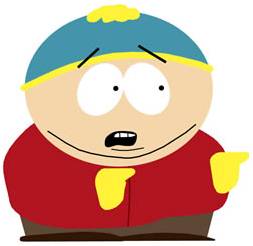 Another Duck I'm struggling to find a suitable nickname for, though when watching a game I can't help but call Christensen "Fake Pahlsson", because of his deceptive #26.  It's actually a calming mind-trick -- for a split second I stop worrying and assume quickly that Pahlsson's there to save the day, before quickly re-realizing that those days are long gone.

But just like "Nickelodeon", "Fake Pahlsson" just doesn't make for a good sight gag.  Instead for today's post, I just threw in a picture of a much more famous Eric C., in the midst of one of his "screw you guys, I'm going home" moments.  One thing I like about Christensen so far was his response to not getting a qualifying offer this summer from the Ducks.  He could have run off as a suddenly-UFA with a pretty legit "screw you guys", but instead re-upped with Anaheim for his old salary early on July 1st -- he never even shopped around.

That's not to say that Christensen would have been a hot commodity or anything -- probably it was a good move for the young forward to ensure a job for next year -- but I think it shows some determination to prove himself, now that he's already on his third team.  As for his skillset, Christensen is definitely a puck magician and a slick passer, and it could be that he and Andrew Ebbett face a similar struggle -- seemingly built to play in the top six but not enough room on the scoring lines.  It's possible that Ebbett and Christensen compete with each other for a roster spot this coming year -- it's not a bad thing to have one skilled guy on the fourth line, but their lack of PK experience probably prevents both of them playing. 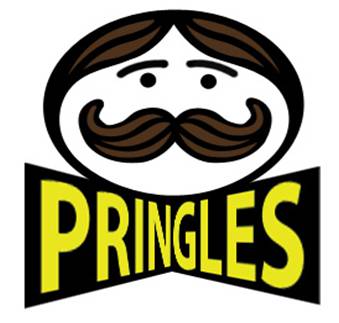 This picture was too perfect, no doctoring even necessary.

I really should have put together a separate post about George Parros -- his contributions to the team are on somewhat a different plane than the rest of these forwards, and extend well past his on-ice presence.  The guy is a flat-out hero in Anaheim, whether well-deserved or not -- SoCal hockey fans like their moustached fighters.

I don't really even know if Parros is a great fighter, though his skating balance has improved dramatically since he first showed up in Anaheim.  To me, I'm not even sure if "great fighter" is a necessity for Parros -- the fact that he's willing to take any antagonist off the ice for five minutes is usually good enough for me.  No, I'm a numbers guy -- for me, I judge a fighter based on what they do between fights, and that's why Parros' start last year had me in shock.

Consider this -- in his first 27 games last season, George Parros had 8 points and was a +10!  That didn't last, though -- over his final 54 games, Parros only had 2 points and was a -2.  Still, at least the Moustache was able to demonstrate some surprisingly decent hockey play, and if that continues he'll be a valuable Duck for sure.

Overall, I don't care terribly if Parros gets outscored a bit -- his minutes are sufficiently controlled that it won't be a huge impact.  His contribution goes outside of that -- he can sell plastic moustaches for charity, be a popular face on a billboard, and most importantly, get the bloodthirsty Anaheim crowd into a game.  That's a great role for Parros, glad to have him aboard. 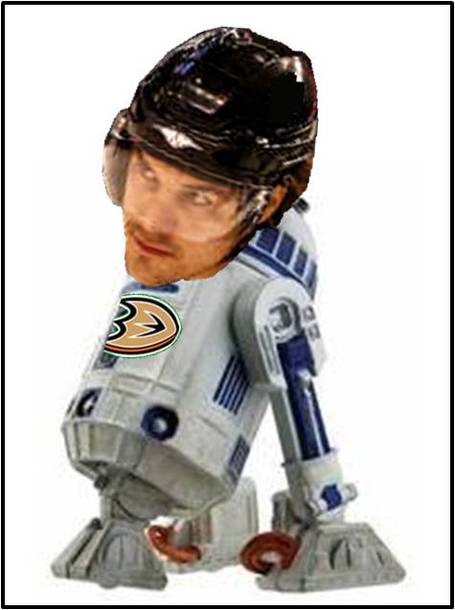 Last but certainly not least (though "least known" does apply, I have yet to see this guy play) is Artoo, the trade return for Miller Lite.  All I really know about this guy is that (a) he's Russian, (b) he's big, (c) he gets a lot of penalty minutes, and (d) he seems popular amongst Lightning fans -- perhaps they share in Anaheim's bloodlust.

So it's definitely more imagination than anything, but I'm kind of hopeful for Artyukhin's possibilities on offense -- he seemingly is built as a cycle-the-boards machine, and has scored decently on my XBox.  If there's a way that Artoo could model his game around that of Todd Fedoruk, possibly even with Getzlaf and Perry (hopefully without dragging their numbers down too far), that would make the offense incredibly deep.

I know I should be keeping my expectations low for a guy I've yet to see play, but I guess that's really the beauty of the Anaheim forward possibilities -- it seems a ripe environment for a hitter to thrive, and here's hoping that Artyukhin brings that element with him to Anaheim.

That wraps up the forward portion of this "Season Review" series, and I've profiled 14 different players that will ultimately fill 12 forward spots.  When healthy, I think we can safely put Getzlaf, Perry, Ryan, Selanne, Koivu, Lupul, and Marchant as roster locks, which leaves five spots for seven players to compete for (the six profiled here plus Ebbett).  Question for the comments: Out of that set, who would be your two scratches on a full-health night?

As I said before "le jump", forward depth definitely looks to be the strength of the Ducks this coming season -- whenever there's loads of spreadable talent and competition for roster spots, it usually results in success.  I think it's critical for the Ducks that it doesn't take too long for the forward lines to click, though, because as we'll see in my next post, there's going to be a lot to make up for on the newly-crafted blueline. Should be an adventure -- can't wait for it to get underway.