Share All sharing options for: Go to Hell, John Buccigross 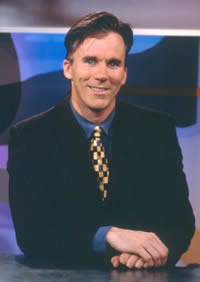 This is weird.  I still hate Bruce Garrioch for that whole "Malkin to the Kings" thing, and I despise Andy Strickland for the "Pronger to the Kings" thing, but I love John Buccigross.  I read his column every week and I know all about his little ferret and Chicken Parm.  I almost bought his book with Keith Jones before I realized the book would be about Keith Jones and I could give less of a fuck about Keith Jones.  I love John Buccigross because, while he may not always know the most about hockey and he gets sidetracked by irrelevant stuff, you can always tell he really, really loves hockey.  He treats it with a lot of respect, and I respect that about him.

And yet, he messed up yesterday.  It wouldn't be fair to just forgive him when I've lambasted other rumor-mongers who made a mistake, so I guess if it's fair I should do the same to Bucci.  It's like that part in Full Metal Jacket where they smack Vincent D'nofrio with soap; I may not want to do it, but I feel I owe it to him.  So, here goes:

You suck, John Buccigross.  Where the hell do you get off telling me my favorite player has been traded, leading me to drive home nearing tears while listening to "Cold as Ice?"  I had already made my peace with the fact Frolov was gone when I got home, only to hear everyone had denied it.  You almost killed me, you bastard.  Do you go around telling people one of their relatives died and then say, "Sike!" before running away, because that's what you did to me.  I hate you.  Your ferret is stupid and no one cares about your stupid kid.  I hope you die while trying to flood your ice rink this winter.  Go to Hell, John Buccigross.