Most Frequent Linemate: Everybody, at least a little bit

I mean, in Top Gun you're supposed to identify with Maverick.  He's the main character, he's on screen pretty much the whole movie, he's played by a pre-crazy Tom Cruise, he's the hero.  You're supposed to want him to get his name on the little plaque, to cheer when he shoots down Jester, to cry when his best friend Goose dies, and then cheer again when he saves the day against the MiGs.

The problem is, Maverick is a douche bag.

Seriously, maybe it's because it was the '80s (the Golden Age of Douche Bags) and people didn't know how to write a sympathetic main character, but Maverick sucks.  He doesn't listen to his instructors, he likes to scare the shit out of air traffic controllers when they're busy, I don't know, keeping planes from not crashing.  He hits on a girl while she's on a date with another man, then shows up late for their first date because he was playing shirtless gay volleyball and then, after finally showing up, asks to take a shower at her house.  (The hell is that?)  Then, after his best friend dies in an accident that absolutely no one blames him for, he mopes around like a little bitch and misses out on graduation because he misses his dad or something.  It's not until the very end when he actually does something heroic, and then he gets to do whatever he wants and it's somehow justification for him being a dick the entire movie.

Jack Johnson is the same way.  I'm supposed to like him because he's on the Kings and he needs to become a top-2 defenseman for the Kings to win a Cup someday, and yet I can't like him because he's a douche bag.  I mean, it's not entirely his fault (that whole "Jack MF Johnson" thing didn't exactly endear him to me from the start) but he's done nothing since he's join the Kings that has made me think he's going to be anything more than a shitty Dion Phaneuf.  ("So he's basically Dion Phaneuf?"  "Pipe down, Oilers fan.") 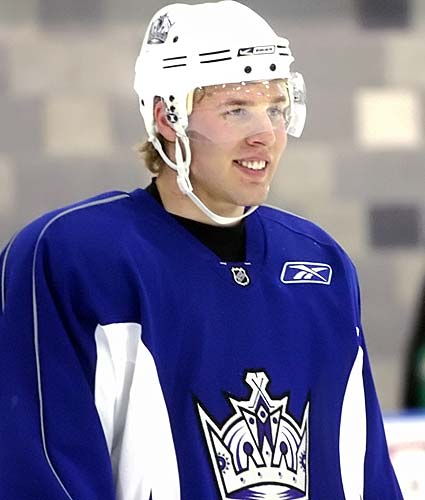 Actually, that's not quite true: like I thought it was kind of cool when Maverick told Slider, "You stink," I thought Johnson was pretty cool during the 07-08 season, when he was the only defenseman on the team who was really committed to playing defense.  What happened to that Jack Johnson?  Last season, Johnson prepared to be THE GUY on defense, but then he got injured; when he came back, he came back to a team that didn't really need him.  He was supplanted as THE GUY by Drew Doughty, Sean O'Donnell and Matt Greene were the defensive defensemen, and Kyle Quincey was the token offensive guy.  You could tell Johnson was uncomfortable, or at least Terry Murray was uncomfortable in knowing what to do with him, and Johnson was uninspiring and uneasy on the ice.  He had a few flashes of brilliance: he scored a few nice goals, made a few nice hits.  But mostly, Jack Johnson kind of... stunk.

Johnson had the highest even strength goals against per 60 minutes of any defenseman not named Tom Preissing last year, and it followed him no matter who he was playing with.  He played with Matt Greene for most of the year, and I think Greene actually did a fairly decent job of covering Johnson's mistakes, but Greene's overall stats suffered.  He played with Drew Doughty for a while, and Doughty's play suffered.  He played with Peter Harrold, Kyle Quincey, Sean O'Donnell... they all played worse, or at least looked worse, when they were with Jack Johnson.

The problem with Jack Johnson (and with Maverick), is that they take too many chances.  You can get away with that shit in a movie, but in real life it just annoys your teammates and pisses off your superiors.  The real heroes are the guys like Drew "Iceman" Doughty, the ones you can count on to always do the right thing.  I think Jack Johnson is finding out that life isn't a movie and you can't count on always coming out ahead just because you think you will.

Last year, after Johnson's unimpressive yet productive rookie season, Johnson looked around the league and saw he wasn't an elite defender.  He didn't quite have the positioning to protect his net, and he sure as hell didn't have the right mentor to lead by example.  (You suck, Rob Blake.)  Jack's solution?  Add 25 pounds of muscle.  Johnson's a guy that has always been physically superior specimen to his opponents, and he tried to regain that in the NHL (and immediately injured his shoulder).  The problem is, he's not going to be bigger and faster than everyone in the NHL.  Johnson needs to get bigger between the ears, not between the shoulders.  Until he does that, he's going to crash and burn in the NHL.

The Future: Jack Johnson can be a good hockey player.  He's only 22 years old.  I'm only giving him a hard time because a) he's absolutely crucial to the Kings' future, and b) I don't like him very much.  He could become a "good" hockey player by being the same type of player he is now, the one that makes a nice hit and scores a nice goal and almost makes you forget that he took 2 bad penalties that cost your team the win.  Or, he can wise up, play smart positional hockey, score a bunch of goals on power play and actually earn the plaudits he's gotten from Kings' fans since he was traded to the team.  I assume Johnson is going to take the former, but he could always surprise me and take the latter.  Terry Murray's best course of action with Johnson would be to give him the minutes Kyle Quincey had last year: put him on the bottom-pairing at even strength, then let him take big minutes on the power play and penalty kill. Let him play with Jarret Stoll's line and hope that they're good enough defensively to cover for the inevitable mistakes Johnson will make.

If I had one piece of advice for Jack, it'd give him the same advice Viper gave Maverick:

A good pilot is compelled to evaluate what's happened, so he can apply what he's learned. Up there, we gotta push it. That's our job. It's your option, Lieutenant. All yours.