Hello, BoC readers and visitors! Today begins a 15-day gauntlet of season previews from all across our SBN hockey megaplex. Each day one eastern conference team and one western conference team will be profiled by team bloggers, and since we're sticking with the time-tested tradition of alphabetical order, our Atlanta Thrashers site -- Bird Watchers Anonymous -- and our Anaheim Ducks guy -- yours truly, until Anaheim Calling gets its act together -- get today's inaugural honors. A warning to regular BoC readers: this preview is intended for a wider audience than usual, so be prepared -- for purposes of this post, I'll probably use more traditional language -- "Getzlaf" instead of "Baldy" and "San Jose Sharks" instead of "Chokers up north". Enjoy! 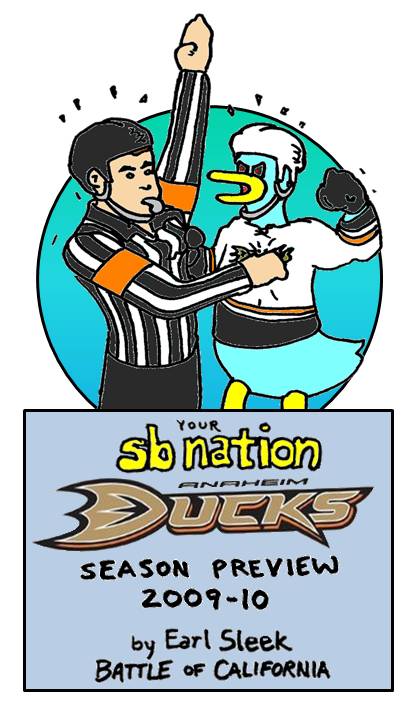 2008-09 Season Recap: The Ducks' season was one of prolonged mediocrity for the first 69 games of the schedule -- through mid-March, seemingly every bit of good luck was countered by an equally bad one. Bobby Ryan was top notch, but Brendan Morrison couldn't get his act together. Jonas Hiller emerged as a top netminder, but J.S. Giguere turned awful. The power play was a deadly weapon, but the penalty kill was a disaster. The Ducks scored 3 goals regularly but typically allowed 4. Through Game 69, the Ducks sat one game above .500 and looked frustratingly out of a playoff spot. Longtime Ducks Chris Kunitz, Sammy Pahlsson, Travis Moen, and Kent Huskins were all shipped out via trade, and the Ducks began retooling for the future.

However, when Anaheim's back was squarely against the wall, the Ducks flipped on a magic "urgency" switch and began winning with regularity -- they ended the season with a whopping 10-2-1 record which was somewhat illusory (the Ducks blew four 3rd period leads in the stretch but won all four in OT/SO) yet effective. With a 2 point margin, the Ducks snagged the 8th playoff spot on the last day of the season, and prepared to meet their doom at the hands of the Presidents' Trophy Chokers up no San Jose Sharks -- a team with plenty to prove in the postseason.

It was, of course, a long-awaited series for this blog, a postseason Battle of California that finally featured modern-day franchises. And of course it was an awesome result -- not every franchise gets the sweet opportunity to end Jeremy Roenick's career. The Ducks upset the Sharks in six games, and even pushed the 2nd-seeded Red Wings to a tight game seven before folding. The Ducks proved one lesson: regular season success does matter; it is really tough to keep winning as an 8th seed, because you're guaranteed a steady dose of top opposition.

The 2008-09 season was also the closing chapter for a couple notable eras in Anaheim -- longtime general manager Brian Burke, after spending all the money he could in Anaheim, left the Ducks in November to take a higher-spending position in Toronto, leaving Bob Murray at the helm. Also, it became the final season for Chris Pronger in Anaheim; three years after his acquisition, the Ducks traded the opposition-despised defenseman to the Flyers, which seems fitting -- in Philadelphia, a substandard moral code is usually rewarded by a hearty pat on the back.

In fact, now that the dust has settled from all the offseason activity, the Ducks have only eight players left from their Stanley Cup team two summers ago -- Giguere, S. Niedermayer, Selanne, Marchant, Getzlaf, Perry, Carter, and Parros. It's certainly a lot of roster turnover, but it also reflects the salary cap realities of a mid-market team with success; Burke built an expiring roster structure that left his successor with plenty of flexibility -- one aspect I really respect him for. And while many former Ducks have turned their cup success into valuable paydays elsewhere, GM Murray has filled out the roster with affordable talent that can hopefully keep the Ducks playoff-bound while readjusting the franchise to its proper mid-market spending budget.

Team strengths: Offseason additions of Saku Koivu and Joffrey Lupul should help Anaheim's forward depth considerably; during the playoffs the Ducks' offense mainly consisted of the Getzlaf-Perry-Ryan top line plus Teemu Selanne, with an odd triple-overtime goal by Todd Marchant sprinkled in for effect. That top line was fantastic, though -- over their final 26 games (the 13-game stretch run plus the two rounds of the playoffs), the trio combined for 39 goals and 48 assists, always in must-win situations and often against top-line opposition.

Against the Red Wings in Round 2, however, the Ducks were overcome by Detroit's ability to roll multiple scoring lines vs. Anaheim's ability to essentially roll one. The hope is that by fortifying the forward roster, the Ducks can imitate that pattern of offensive depth, which almost seems necessary -- they'll likely have to make up for some extra goals-against in Pronger's absence.

One other team strength is depth in net -- it's unclear right now who will emerge as Anaheim's #1 this season, though Jonas Hiller is probably the frontrunner. J.S. Giguere has been a marvelous goalie in the past, though; if he rebounds it provides the Ducks with two strong options in goal.

Team weaknesses: There's a ton of uncertainty about how the Ducks' blueline will cope with the losses of Pronger and Francois Beauchemin. Captain Niedermayer will obviously be the key -- he's played 347 games in a Ducks uniform, while the next highest defenseman, Sheldon Brookbank, has played only 42. Bob Murray has brought in quite a few useful defensemen, though -- Ryan Whitney, James Wisniewski, Nick Boynton, Luca Sbisa, and Steve Eminger all have NHL experience elsewhere -- but for three years Ducks fans have enjoyed a blueline featuring two of the game's best, a luxury that will be missed.

Quite simply, my concern is about every Ducks defenseman not named Niedermayer or not paired with Niedermayer -- the captain has proven to be quite a good babysitter for learning defensemen in the past. If the bottom four can't keep their heads above water, though, it's probably going to be a tough year in Anaheim. Plus there are loads of special teams minutes that need to be filled -- Pronger was a boost in all situations, and his absence could hurt the Ducks there, as well.

(I should also add that per my opening cartoon, another team weakness is clearly the Ducks' knack for taking too many penalties, but by now that complaint has grown stale -- these days it makes for a better cartoon than a discussion topic, I think.)

Depth Chart: (note -- with so many players new to the team, it's best not to read too much into line combinations or depth rankings; Coach Carlyle will decide those things. I should note one oddity -- the Ducks don't have any natural left wingers; all forwards are either right wings or centermen):

What's particularly nice about the depth chart is that there seems to be a good amount of competition for every position -- NHL-caliber players will be denied playing time this season, it appears. That's one source of hope for this year's Ducks -- they have plenty of roster options to experiment with; hopefully they can concoct a winner.

Prediction for 2009-10 season: Even though the Sharks have lost some depth, shook up their lineup, and are hugging the salary cap ceiling, they're still the reigning Presidents' Trophy winner, and will probably take the Pacific Division again. That's OK, though -- Anaheim has only taken the division title once since the lockout, but more importantly they have been the longest-surviving team from the Pacific Division in three of four post-lockout postseasons. If they can continue that trend, I'll likely be satisfied -- I can drink Shark tears all day.

On paper, the Ducks look like they have a solid enough roster to make the postseason and survive the Post-Pronger Curse, but there's still enough unknowns about the team (plus other contenders in the western conference) to say for sure -- what say you, readers? Take a stab at the poll -- c'mon, it took me sixteen separate steps to create! And feel free to leave a comment about any part of the Ducks preview -- what are you hoping to see out of the Ducks this year?

I know I can't wait; the season is nearly upon us! Go Ducks.