The Kings line-up is fairly well set in stone; unlike the last few years, when you and the family dog were in contention to become the Kings' new goaltender (your dog had a weak glove hand), the Kings really only have the peripheries of their line-up to be filled out.  The most prestigious spot up for grabs is that of left wing on the Stoll-Brown connection, incorrectly referred to as the 2nd line because people have this archaic assumption that lines that play good defense have to be known as the 3rd line.

Anyway, there are a couple candidates that are likely to fill the role and each would change the identity and chemistry of the line.  The only thing any of these guys have in common are that they're on the Kings and their eyes are small.  Here are the candidates:

(I would criticize the person that put that thing together but that is literally the best picture of Teddy Purcell I've ever seen.)

Most Kings fans would probably assume that Oscar Moller would be the front-runner for this position, but I think the Kings have been sending subtle hints that it was Purcell's job to lose all summer.  They had him on the Kings cruise this off-season, put him on a panel at HockeyFest, and have done nothing but praise his conditioning and compete level since camp began.  It seems clear that the Kings want Purcell to win the job, not only because it would give them a set-up man on a line with 2 shooters but also because it's Purcell's last chance to win a job with the Kings.

Purcell showed up to camp larger and more filled out than he ever has before and seemed to use his weight a lot better in the corners.  There are some guys that show up one day and you can see that their demeanor has changed and they're ready to skate in the NHL; Teddy looks like one of those guys.

It's odd to say when you're comparing a 24-year old to a 20-year old but Moller is probably the more easily projectable player of the two.  Ted Purcell could be a 50-point winger next year or he could mope around like he did last year.  Moller, on the other hand, is pretty predictable; he's going to get pushed around but he'll net you some nice goals and finish with around 35-40 points.  I don't think the Kings necessarily want him on the team because they want him to learn how to play with men in the AHL, but they didn't want him on the team last year and he managed to make it then.

The biggest problem with Moller is that most of his value is derived from the power play but there won't be too much room for him there next season.  Last season, Moller only had 6 even-strength points in 40 games, while he tallied 9 points on the power play.  The Kings don't need another special teams ace, they need someone that can affect the game at even-strength.

Another problem with Moller is how he fits on a line with Brown and Stoll.  Purcell fits because although he has a nice shot he is primarily a passer, while Stoll and Brown's biggest attributes are their shots.  If Moller were on the line it'd be 3 guys skating around with their sticks half-cocked waiting for a one-timer while the other team takes it in on a 3-on-2.

I'm not a huge Oscar Moller fan.  He's a little too small and doesn't really bring anything else that compensates for that lack of size other than a big heart.  I'd much rather he figure out how to play against men (if he can) and then come to the NHL rather than figure out up with the big club.  But we'll see; Dean Lombardi loves guys that compete and that's one area Oscar Moller has all over Ted Purcell, at least in the past.

Lewis isn't really in contention for the spot with Stoll and Brown; Lewis is in contention if neither Purcell nor Moller prove capable of creating offense and the Kings have to move Alex Frolov into a more offensive role.  Trevor Lewis is listed as a center but the Kings have been using him as a right winger pretty much exclusively in camp.  A former first-rounder, Lewis' career potential isn't that of a scorer but more along the lines of a Rob Niedermayer, a former high pick who uses his physical tools to shut down the opposition.  Lewis is big, fast, has a hard shot and isn't afraid to bang in the corners; what he lacks is great hockey sense.  Like Niedermayer, Lewis will probably end up on a stopper line in the future somewhere and it could be in LA next season.  If that happens the Kings are in a lot of trouble but you know, Murphy's Law and all that. 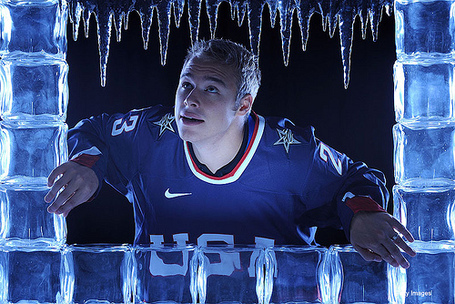 But Dustin, you're the one looking up, that doesn't make se-

"-Anyway, I give this one to Ted Purcell.  He's a passer, and that's what I need so I can really break the shit out of the glass this season.  Plus he's got the look in his eye this year.  You know, that look that says, "Hey Dustin, you're a really cool guy."   I like that in a player.