The 4th line is kind of difficult for any poor blogger to predict. For one, no one tells us anything because they are frightened by our rugged good looks and large penises... OK, fine, they are repulsed when they shake our hands and get covered in powdered cheese. For two, the 4th line isn't so much composed of a "left wing-center-right wing" as it is determined by role. The Kings seem deadset on having an "Enforcer-Skill player-agitator" for at least half of their games this season, a more traditional 4th line after having what can charitably be called a clusterfuck 4th line the past few years.

The most glamorous battle is taking place among the meatheads, the noble heroes who beat the shit out of other trogolodytes for their dinner. I'm not a huge fan of enforcers but Terry Murray is, so you can assume that the Kings will have at least one enforcer on the ice most games.

I love the abstract ideal of Raitis Ivanans. He's a giant, he's Eastern European so it allows me to come up with hilariously inappropriate stereotypes about him (he eats shoes, for one), and he's a pretty good fighter. The problem with the real Raitis Ivanans is that he doesn't play the game of hockey well. I mean... well, I guess he's not a terrible hockey player, but he takes a ton of penalties, so many that it becomes a detriment that has him out on the ice. Last year Ivanans scored 2 goals, took 35 minor penalties and intimidated exactly one person.*

*The only time I thought Ivanans was awesome last year was in a game against Toronto, where one of their goons pushed Kopitar. Ivanans immediately came out and proceeded to follow the guy all around the ice, trying to goad him into a fight. I'm not sure if that guy took a shift after that.

But I feel bad blaming it all on Ivanans because it wasn't really his fault. He's not the one who decided that he should skate a regular shift instead of spots here and there like most enforcers. He's not the one who decided he was a regular NHL player and not a mindless goon. Blaming Ivanans for his play last year is like blaming one of Mike Vick's dogs for biting someone. Terry Murray needs to either a) not play an enforcer as much if he wants a real 4th line, or b) not skate his enforcer so predictably. Ivanans can be an effective enforcer because there isn't anyone in the league that he can't fight, but his role needs to change so we can avoid another year like last year.

Have you ever read The Dark Knight Returns? Westgarth looks like the lead mutant guy. Anyway, Westgarth is an interesting contrast to Ivanans. While Ivanans actually does have a little skill, Westgarth is a straight fighter with no talent whatsoever. While Ivanans is under the impression that he can win a fight on points, Westgarth throws caution to the wind and hopes he knocks the other guy out before he gets rocked. Basically, Ivanans is a more modern fighter while Westgarth is a throwback to the old era when fighters rarely touched the ice with their sticks.

Westgarth vs. Ivanans really comes down to what type of enforcer the Kings want. Do they want one controlled, one that plays in every game, one that can hopefully skate a regular shift? They'll pick Ivanans. Do they want one that will energize the crowd, one that'll pick up a few instigator penalties if that's what's needed, one that will be sat when the Kings don't need him? They'll pick Westgarth. I actually hope Westgarth wins this battle not because I like him more (I'll always be an Ivanans man) but because he'll occupy a role that's more compatible to my ideal version of this team. I'm sorry, Raitis, but it might be time for you to go.

King had a fight during the prospect game where he punched a Coyote so hard in the face that the guy just stopped fighting and skated away. I'd never seen that before. King won't make the, uh, Kings this year but he could ultimately be that fighting hockey player Lombardi seems to want so much. 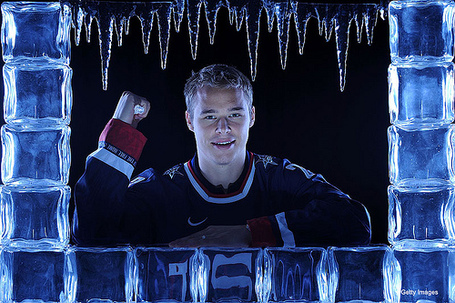 "Grrrrrr!!!!!!!! Haha, don't worry guys, it's just ol' Dusty here. Did I scare you? C'mon, I'm a lover, not a fighter. I love having big Raitis on our team but Westy's pretty cool too. There was this one time, though, when I was in the shower and I turned around and Raitis was standing right behind me. I was a little surprised and asked him what he was doing and he said, "Just checking." It was strange."