The Kings are going to need one competent player on their 4th line that can chip in on speical teams and take faceoffs before their two idiots trip someone or whatever it is they do. This skill player is most likely to play center, since it's the position with the most defensive responsibility and requires the most smarts. For the first time in a couple years, the Kings don't have Derek Armstrong to fill this role. Who is the next mediocre player that inexplicably becomes a coach favorite and plays way more than they should? Let's find out!

Sigh... Peter Harrold. He's a good guy. He tries very hard, he switches positions based on what the teams need, he does the little things in the trenches that don't get noticed but help the team. The problem is that he sucks. I mean, it's great that he can suck at defense and center, but he still sucks. I don't like saying it; it's not like I get my kicks deriding the skills of better men than I (unless they really suck like Brian Willsie), but he does kind of suck. I guess he'd only be the 4th line center, so it's not too bad, but the best place for Peter Harrold is in the press box until the Kings need him in an emergency. The Kings are actually kind of a good team this season; the thing about good teams is that they don't have players like Peter Harrold on the team.

(This picture selection guy is my new best friend)

Brad Richardson kind of sucks too, but the thing with Richardson is that he could be better. While Harrold is pretty much resigned to his fate, Richardson could eventually turn into something valuable. Richardson had a weird season last year where he cut himself with his own skate (?) and then got gangrene or some shit, so he didn't play very much. However, he has skill and would fit in better at the center than Peter Harrold, I think. Like I said earlier, I was watching training camp earlier this week and noticed how good Peter Harrold was before I realized I was watching Brad Richardson. He's better.

Of course, the Kings may go with Peter Harrold because of the versatility he has... by the way, does anyone care about the 4th line center? I do, but I'm thinking I may be the only one. Do they have rehabs for sports fans? I swear I could have been, like, a banker or something if the Kings hadn't ruined my life.

It's crazy to consider, but Schenn has been very good in preseason and has the body to play in the NHL right now. I wish Schenn could go to the AHL but I guess Kelowna needs to sell tickets so he's probably resigned to the CHL again. It would be kind of interesting if Schenn did stay up, though; he could play ~10 minutes a night, learn from the other centers on the team, and curse his fate as his beautiful set up pass was spoiled by Raitis Ivanans' incompetence. Earl and I disagree about how to treat prospects; he likes to wait until they're 27 years old, play them for 2 years and then trade them for someone's brother, while I like them to play until they're 23 and then declare them too old for my team. Schenn will go down to Junior, blow it up, play in the World Junior Championships, and then make the Kings in 2 years. But there's always a chance... 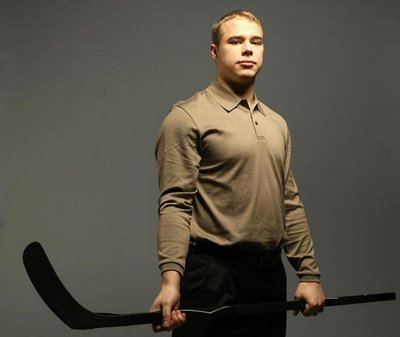 "Oh, hey guys. Just taking some promo pics for the season. You know how it is when you're me, always having to please the masses... unless they cheer for the other team! Oh Dustin, you card. Anyway, I think Brad Richardson will win this one so we can have a line filled with guys with dickhead first names. Brad-Jarret-Teddy? Sounds like a party at Los Angeles Country Club! Hahaha... I'm a member there, by the way."