The Kings haven't had an agitator since Sean Avery and have missed that middleweight figher ever since. They've had an enforcer, sure, but enforcers don't really intimidate anyone because they can't get away with facewashing and all that extra-curricular stuff. The Kings should have one this year, though, which should make the fans happy and haters of power plays cringe. Dean Lombardi and Terry Murray love agitators, though, so we might as well get a good one.

Richard Clune was traded to the Kings in the deal that sent Lauri Tukonen to the Dallas Stars. He surprised many people last year with his... interesting moral code and almost made the team before a chest injury knocked him out for a good bit of last season. Dick (and that is your name... Dick) is distinctive for two reasons: he looks like a burn victim and he's a complete, utter asshole. He has a problem with penalties, both majors (13 in 35 games last year) and minors (11), but he plays with that edge that is desirable in an agitator. He also has a surprisingly deft touch with the puck and isn't as bad as, oh, I don't know...

...John Zeiler. Instead of questioning the legitimacy of his birth for the thousandth time, I'd like to compose my feelings in a haiku:

And he eats babies for fun

Clifford was the 2nd round draft pick this past year and looks to be a future 3rd line winger for the Kings. Clifford only had 23 points in the OHL last year but he could end up being similar to Wayne Simmonds, a guy with a simple game that translates well to the NHL. People may be upset that Clifford will never be a 2nd liner, but the likelihood of him being an NHL'er is pretty good. Probably not this year, but in 3 or so, definitely. 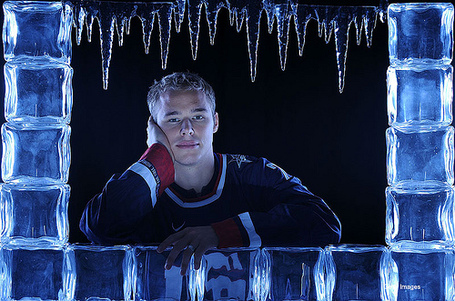 "Oh, these guys. These guys crack me up. Still, gotta keep them in their place. If you don't, these guys will come in, push you around, make fun of your lisp, well now's the time I say, 'Fuck you, Sean Avery! I'll kill you!'

"...I'm off message. I think Clune will win the job but Zeiler is a nice enough guy. We go bike riding together sometimes. He always thinks he's going to win but... no."