While the forwards have 4 potential jobs up for grabs, the defense only really has 1. Doughty is the number one and will most likely play with Sean O'Donnell at the start of the year. Jack Johnson and Rob Scuderi look like they will be a pairing, which should be good because Scuderi is positionally sound and should be able to cover up Johnson's mistakes. That leaves Matt Greene without a partner. Two men are fighting it out, and the winner will likely decide both the power play and penalty kill units.

(Note: If Peter Harrold doesn't make the team as a forward he will likely be in the press box as a utility man and should serve as the 7th defenseman, at least for the beginning of the season.)

Davis Drewiske is an interesting prospect because absolutely no one paid him any attention until he got called up last season. A free agent pick up out of Wisconsin, Drewiske had a solid if unspectacular year for Manchester last season before getting called up for 17 games at the end of the season. Paired mostly with Matt Greene at even strength and Drew Doughty on the power play, Drewiske was pretty good and became Kings' fans new hobby horse like Erik Ersberg was the previous summer. The 24-year old is solid; he's someone you can expect to make the right play, although not necessarily the great play. Drewiske has been skating with Matt Greene all preseason and has given no reason to doubt his ability to play at the NHL level.

Of course, Drewiske is not likely to be much better than he is now, and no matter what people tell you he doesn't have much offensive skill. No one is going to tell you Drewiske is not a good player, but they'll tell you that Drewiske doesn't have any skills that aren't replicated many times by the likes of O'Donnell, Scuderi, and Greene. One of the big problems with the defense of the Kings last season was that, besides Doughty and Kyle Quincey, they didn't have anyone that was a threat from the back end. Drewiske doesn't solve that problem.

Hickey, 4 years Drewiske's junior, would help solve the Kings' scoring woes, but the question you have to ask with him is, does he create any new ones? No one doubts Hickey's abilities or hockey sense, but the question of whether he can handle the physicality of the NHL is unanswered. Hickey has been tremendous this preseason, his highlight being a wonderful fake on a 3-on-1 to set up an easy goal for Brayden Schenn, but he's under the same situation as Oscar Moller: if the Kings have an older prospect that can do a servicable job this season, isn't it better to spend a year in the AHL and get bigger and stronger?

The difference, of course, is that Davis Drewiske is not Ted Purcell and Thomas Hickey is not Oscar Moller. It'll be interesting to see; I think the Kings will go with Drewiske in the early going and then bring up Hickey sometime this season. The Kings power play will look a little weird without Hickey, as both Justin Williams and Jarret Stoll will likely man the points, but they can probably get away with it for a little while. I think Kings' fans, myself included, can run into trouble in the wake of Drew Doughty because we expect every defenseman can make a seamless transition to the NHL. Jack Johnson's transition is much more common. Hell, look at Matt Greene; last season was his 4th season and it was the 1st that he was anything more than a 7th defenseman. Hickey's time will come. Is it this season? I don't know. This is the toughest battle yet and I wouldn't complain about either one.

There isn't a dark horse. It'll be either Hickey or Drewiske. 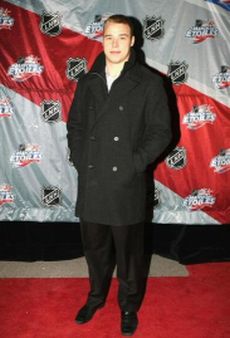 "Hey. Pretty cool jacket, huh? I know a guy who got me a deal. Can't help you though, these things are one of a kind. I want Thomas Hickey to win this battle because we only have room for one good looking guy on this team... and we already have Kopitar! Hahaha... just kidding, Kopitar's a ghoul."