Kings Preseason Gameday: This is Where You Fall Down

Share All sharing options for: Kings Preseason Gameday: This is Where You Fall Down

Terry Murray said recently on LAKings.com that the Frozen Fury line-up would be an indication of how he would start the season in light of Sean O'Donnell's suspension.  This is that line-up:

There are a few surprises: Lewis playing center, Westgarth over Ivanans, Bernier over Ersberg, and Alec Martinez paired with Drew Doughty.  The Martinez one is the most surprising to me because I thought it was going to be Hickey or bust, but I can come up with a few reasons the Kings chose Martinez over Hickey:

1) Martinez is better.  Unlikely, at least to my eyes, but there's always a possibility the Kings staff felt Martinez is better than Thomas Hickey at this point.  Martinez is a well-regarded prospect that would be better known if it weren't for the Kings' Hickey-Teubert-Voynov trifecta stealing all the attention, and he won a defensive defenseman  award in college while still leading all defensemen on his team in points.  He played last year in Manchester and tied Vyacheslav Voynov in points among defensemen.  He's good, and there's no shame in not beating him out for a spot.

2) Martinez has paid his dues.  Dean Lombardi is weird and thinks people need to pay their dues before they make the NHL.  He hasn't really been able to adhere to that policy in the past because, well, you can't tell Wayne Simmonds he needs to wait and then play John Zeiler, but now he can slow burn his prospects.  Martinez has already played a whole season of AHL hockey and has played well; he deserves a shot, at least for two games.  Hickey can wait until next year.

3) Martinez is expendable.  Whoever is chosen to replace Sean O'Donnell will do so for only 2 games, and the Kings might figure there's no point in jerking Thomas Hickey around when you have another prospect you can dick around instead.

4) Martinez is good-looking.  Alec Martinez has kind of a Jesse Metcalfe vibe going on, which will help guys like Richard Clune and Anze Kopitar get into Pure this weekend.  Thomas Hickey, on the other hand, looks like one of the Beav's friends. 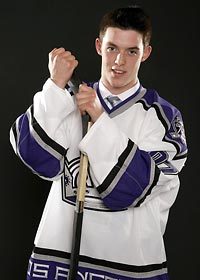 "Hi Mrs. Cleaver, can the Beav come out and play?  Golly, he sure is swell!"  *Has a paper route

5) Alec Martinez is 21.  There are 2 players in Kings training camp that are under 21: Thomas Hickey and Brayden Schenn.  Neither are going to Frozen Fury.  It's not crazy in my mind to think that the Kings are keeping both players in LA because going to Vegas when you're in that 18-21 is the worst thing in the world because you're old enough to understand the fun people are having but you can't have it.  It'd be like being 12 years old and watching other people play Mortal Kombat all day.*  The Kings play tomorrow in Anaheim; Hickey and Schenn will be in that game.  I still wouldn't be surprised if Hickey is standing alongside Doughty on opening night.

*I think an interesting government experiment would be to play the Mortal Kombat song in public places and then observe men's reactions.  If a 20-something male can hear that song and not do shitty jump kicks while saying, "Those were $500 sunglasses, asshole," they're a better man than I.**

**The writer Joe Posnanski (who is awesome) has this theory about Pixi-foods, the idea that there are foods you love as a kid but hate as an adult: pixie sticks, hot dogs, that sort of thing.  It's a good theory and I don't think it describes just food; it describes movies as well.  I saw Mortal Kombat on TV the other day and... I loved that movie as a kid.  I thought Johnny Cage was the coolest mother fucker on the planet, Raiden was awesome, and the Australian guy was hilarious.  But when I saw it P.T.J. (Post-Tony Jaa), I was shocked at how shitty it was.  The fight scenes were clumsy as hell, Goro looked ridiculous, and I think if Shang Tsung's over-acting fell under 50 MPH then his family would die.  (Raiden?  Still awesome.)  It got me thinking about other movies I loved as a kid that I wouldn't like now.  Here's a small list: