This Guy. This is the Guy.

Share All sharing options for: This Guy. This is the Guy. 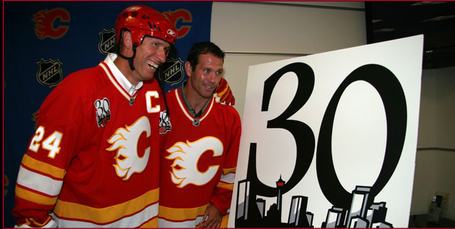 Look at ol' Craig Conroy, sporting the new Calgary Flames retro jersey.  (Looks cool.)  He met that other dude* 5 minutes before this picture was taken and already they're best friends.  Then Craig took everyone to a bar and paid for the first round of drinks before offering to drive that night.  Then Dion Phaneuf tried to act like a tough guy to some oil worker so Craig had to step in and smooth things over by letting the guy win at darts (or shuffleboard, I don't know what the hell Canadians do at bars).  Then he woke up early the next morning to coach his daughter's soccer team.  What a guy, I'll tell ya.

*The other dude looks like the Sloth victim from Seven, only he didn't suffer irreparable brain damage and ended up working for the Flames.  Why is he wearing a helmet?