The Dream Team: 6 Non-Kings I Would Love to Have

Share All sharing options for: The Dream Team: 6 Non-Kings I Would Love to Have

We all have our favorite team that we love more than anything in the entire world (sorry, family).  But still, we all cheat a little bit.  Oh, we act faithful and chaste and we'd never, ever cheat on our teams, but that doesn't mean we don't look occasionally.  I admit that even I, the greatest fan that ever lived, catch myself wistfully watching a player on an opposing team; that is, until Dustin Brown elbows me in the ribs and then lets it simmer for 3 months until I forget to take out the trash before throwing it in my face.  I'm a man, Dustin, you can't expect me to not look!  Anyway, if I had my way these players would all be on the Kings so I wouldn't feel so guilty:

Ilya Kovalchuk is one of those badass Russian dudes that you used to see in old movies.  While Alex Frolov represents the Russians under the Czars (nervous, shifty, cerebral), Kovalchuk represents the Soviets, the guys that would smile at you through blood-stained teeth before putting a knife through your ribs.  He's Ivan Drago with a crappier haircut.  They guy has scored 297 goals in the NHL but my favorite Kovalchuk moment is this:

Did you see that little helmet flip before he gave McCabe the how-ya-doins'?  Bad.  Ass.  He needs his own theme song, like Shaft.

What I would trade for him: My happiness for a year.  I'd walk around with a little storm cloud following my every step for 365 days if it meant the Kings got Ilya Kovalchuk.

Torrey Mitchell is going to be the next great defensive center in the NHL.  Only 24, Mitchell has a lot of promise but has been derailed by injuries early in his career.  Mitchell has great speed and a surprisingly quick shot.  The Sharks signed Mitchell to a very reasonable deal earlier in the off-season, though they'll probably trade him next off-season because they have to change the culture of this team.  It kills me seeing Mitchell on a division rival like the Sharks, but on the plus side I know that I never have to worry about them actually winning anything.  If they do, though, I honestly think Torrey Mitchell will be the reason why.  Plus, he's so darn cute. 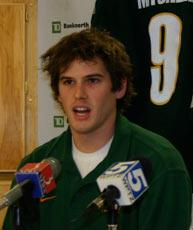 I know, my love of Russians is incomprehensible but  I love Maxim Afinogenov.  We had this guy on my college team named Joe that we called "Joltin' Joe the Anti-Flow" because he would evaluate where the team was headed and then play in the exact opposite direction.  A defenseman would jump up into the play?  Joe would peel around and take the puck back into the defensive zone.  The other team had pressure on our defensemen behind the net?  Joe would be calling for the puck at the red line.  Afinogenov reminds me of him.  It's like he learned hockey on the Moon or something, his teammates have no idea what he's trying to do at any given moment.  I'm convinced Maxim could still be a legitimate NHL player if he were on a responsible defensive team and with another player that could anticipate his odd style.  A team like... hey, that sounds like the Kings!

What I would trade for him: The feeling in my pants I got the first time I saw Jessica Alba in Idle Hands.

I could actually put a bunch of other people here, but I'm picking Michalek because he's criminally underrated.  He is the 3rd best all-round defenseman in the Pacific (behind Marc-Eduoard Vlasic and the guy up next) and yet absolutely no one knows who he is.  Consider this: he obliterated everyone else in blocked shots (271!), he is fantastic positionally, and he scored 27 points last year.  And yet, in our little Re-Draft the League thing Michalek went in the 6th round, behind Marc Staal, Marc-Andre Bergeron and Anton Volchenkov.  Who's the idiot that picked Volchenkov over Michalek?  Me!  That's how underrated the guy is, I think he's underrated and I still forgot about him.  Michalek is amazing and my heart swells every time I see him go down.  To block a shot.  What did you think I was talking about?  Oh.  That's dirty.

Another thing: how is Zbynek so cool and yet his brother sucks so much?

What I would trade for him: These totally sweet plaid pants I bought at H&M on Saturday.  (Ooo!!!!)

Like Juliet and her Romeo, so are me and Scott Niedermayer.  (Wait, I said that I'm Romeo, right?)  I can't help it; the guy won my heart with his smooth-skating ways and his fantastic Scottish Terrier impression:

I love Scott Niedermayer not because he is a great hockey player or because he makes the same face my dad makes when he's unsure whether to smile or not (the one above), but because he perfectly encapsulates everything I find good about hockey.  He can literally play every position on the ice except goaltender, and usually does play at least 3 positions every shift.  He doesn't take cheap shots but he won't back down from anyone, he is probably the 2nd best positional player in the game besides Lidstrom, and he's won everything a hockey player could hope to win.  He is what I would want my son to play like if I could ever get a woman to touch me.

What I would trade for him: Those cherished memories with my grandparents?  Gone.

Like Zbynek Michalek, Tomas Vokoun is ridiculously underrated.  I'd go so far as to say that he's been the best goaltender in the league since the lockout, but because he usually plays for weaker teams he is overlooked.  Plus, he's catches with his right just like me!

What I would give up for him: The memory of the time I saw that guy in the wheelchair hit that lightpole.*

*Alright, so I'm walking back from class on the ol' college campus and I see this dude in a motorized wheelchair.  I pay him no mind until I hear someone yell, "Hey, Mike!"  The wheelchair dude turns around and starts waving at a group of 3 or 4 people, but he never lets up on his... gas, electricity, whatever.  While he's waving, he keeps moving forward and then runs directly into a lightpole, sending his books flying and basically horrifying every person in the vicinity... except for me, and I started laughing hysterically.  As I turned to continue my walk back to the dorm I saw this girl directly in front of me looking at me like I was Idi Amin.  I figure, hey, it would be offensive not to laugh; I mean, if you saw some dude walk into a lightpole you'd laugh, so why should the wheelchair-bound be treated any different?  Really, you're the prejudiced one.

Those are my non-Kings: who are the players you'd give up your childhood toy/first kiss/Earl Sleek's life to have on your team?