Share All sharing options for: Ducks Gameday -- Stampede of Tidbits

Since the lockout, a team has scored 7+ goals in the first game of a back-to-back a total of 51 times (Buffalo and San Jose were #52 and 53 last night).  In the follow-up game, the teams went a combined 25-19-7 and averaged 3.1 goals-scored on night two.  Vague lesson: teams that score a lot on night one of back-to-backs are beatable, but they still pull off night two pretty well.

After starting the season with a dismal 1-5-0 home record, getting outscored 2.2 - 4.5, the Ducks have been getting much better results at Honda Center.  Since the end of October, Anaheim has a 14-3-2 home record and is outscoring opponents 3.6 - 2.4.  Here's the key stat of improvement: the Ducks shockingly allowed more power play goals in their first six games at Honda Center (9) than they did in their next nineteen home games (8).  Way to step up, penalty killing.

I was messing around with timeonice.com some yesterday (click here to read Vic Ferarri's summary; he created it.  Or click here to read my column explanations) -- remember, these results are all even-strength with empty-netters excluded.  With some tricky entry, I was able to explore how Bobby Ryan was impacting results for other offensive players -- I've summarized results for four top-sixers below:

Getzlaf, Perry, Koivu, and Sexton all see their results dramatically improve when B-Ry is put with them; they are a collective -3 without B-Ry and a collective +26 with him.  Plus their shot ratio and corsi ratio (attempted shots) metrics all improve, almost always from in-the-red to in-the-black.  Now granted, there are some factors to consider here -- Koivu and the Sex Offender had their new-Duck adjustment periods away from B-Ry, so some of their improvement is of their own doing.  And also, for a few games, Getzlaf and Perry had an alternative linemate named Kyle Calder; that certainly hurt their non-B-Ry results.

Still, Bobby Ryan was my choice for team MVP a season ago, and based on results so far, I think he's leading the pack once again.  He's been a part of a dominant Getzlaf-Perry line and part of a dominant Koivu-Sexton line, and seems to be a catalyst for offense no matter where he's played.  Long term deal, Barstool Bob -- do it.

Prediction: The Sabres are a staggering 8-0-1 against the western conference this season, outscoring opponents 30 to 14.  That's quite impressive -- it's about double the winning percentage and half the goals-allowed rate of other eastern conference teams playing against the west.  If the Ducks intend on winning this game, it'll take a full-team effort: 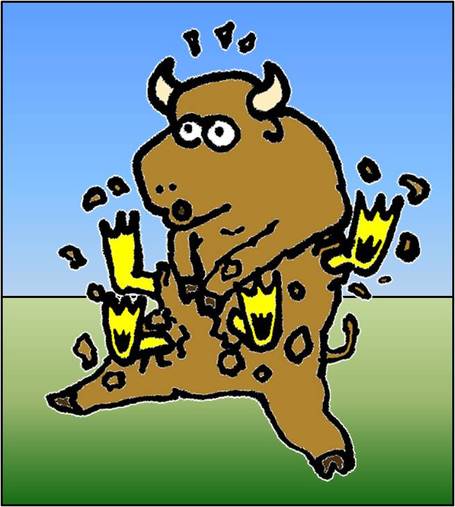 Cows have four stomachs, right?  Maybe buffalo do as well.

Webbed feet by Brown, Getzlaftica, the Hound of Beleskeyville (trying that nickname on for size), and B-Ry.