BoC Gameday -- Could you be more Pacific?

Share All sharing options for: BoC Gameday -- Could you be more Pacific?

Happy Hug Day, everyone!   I thought I'd start out today's post with a rather staggering-contrast table -- here's how Anaheim has performed this season against Pacific opponents vs. the rest of the league (hint: very badly).  They've won only 3 of 9 games against the Coyotes and Stars and 0 of 6 games against the intrastate Sharks and Kings.  And yeah, in case you're curious or vengeful, that hurts the ego quite a bit.

But it's their record within the Pacific Division that's killing them.  Sad fact: the eastern-conference NY Rangers have as many points against Pacific Division opponents as the Ducks do -- eight.  In fact, the Ducks' divisional record ranks them 30th in the league; Anaheim would have made for a very good non-Pacific team this season, it seems:

Including tonight, the Ducks have nine more Pacific games to play, and notably, six more against the Sharks and Kings, where they've been outscored 24 to 9 in six previous BoC meetings.  Of course, the Sharks only play the Ducks once more after tonight; it's the four remaining SoCal games that should be very pivotal (if the Ducks show up, that is). 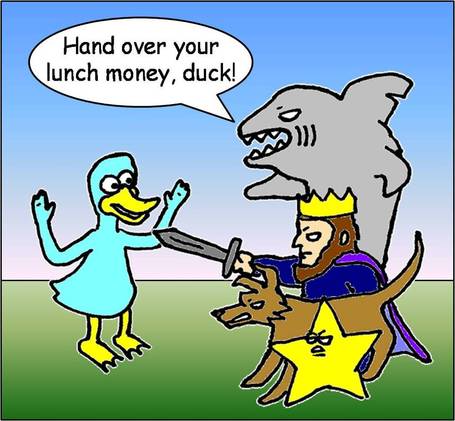 Pacific whining aside, the Sharks are an astoundingly-good team.

* In their last 24 games, the Sharks have given up more than two goals only THREE times (twice to the Kings).

* In their last 10 games, the Sharks have given up more than one goal only THREE times (only once in their past six).

Meanwhile, the still-injured Ducks have surrendered four goals in each of their past three games -- uh oh.

Prediction: It's Thursday night, so I won't be around for game comments -- play nice.  Ducks 4, Sharks 2.  Goals by Getzlaf, Ryan x2, and Chipchura.