I don't know if I can call today's art escapade as "successful", but I started with two logos:

And ended up with this nostalgic Ducks-Thrashers Galaga scene: 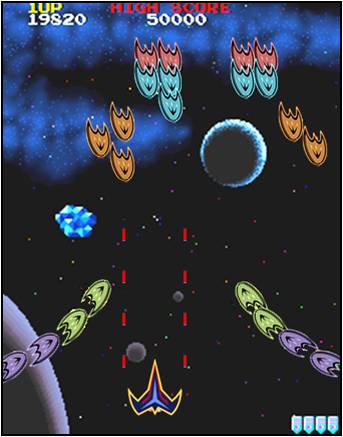 Despite the east/west nature of tonight's Ducks/Thrashers game, it's two fairly important standings points at stake.  Both teams sit three points outside of their respective eighth seeds with some obstacle teams in the way.  On one level, it seems that the teams are on different paths -- the Thrashers have won only 4 of their last 18 games and the Ducks have won 8 of 10 -- but I wouldn't get too confident; the Ducks have benefited from plenty of luck lately; probably the opposite is true in Atlanta.

It seems that I should have a load to say on the idea of trading for Ilya Kovalchuk, but I don't -- most of me hopes that Anaheim doesn't even pretend an offer for the expensive Russian, but I suppose if enough next-year money went back the other way (Giguere or Lupul), I could get sold on the idea.  I suppose Atlanta once did Anaheim a "favor" by taking Schneidermayer's salary off our books at the zero hour in exchange for two games of Ken Klee, but I don't know if anybody outside of Phoenix is happy how that all turned out.

To help think through all the trade talk, Kovalchuk or otherwise, here's a chart I put together of what Anaheim's looking at salary-wise going into next season.  As always, I separated "Cash" salaries from "Cap" calculations -- for the Ducks I think the "Cash" is much more relevant.  And yes, it is nice to finally make one of these charts without the name "Todd Bertuzzi Buyout" on it  (thanks again, Burke!). 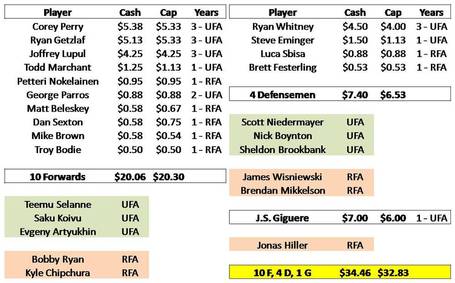 Click image to enlarge.   All numbers taken from CapGeek.com.

What's encouraging is that there's loads of cheap players -- six forwards will be making less than Marchant, and all of them are already cogs in what's turned out to be a pretty useful bottom-six (or better -- Sexton and Beleskey have been useful top-sixers for parts of this season too).  The defense is of course thin but affordable, and most of Anaheim's main offseason storylines will probably be found in the orange-shaded RFAs, decisions by Niedermayer/Selanne/Koivu, or if we're really lucky, with a guy named Giguere.

It's a complicated summer already without trying to outbid the NHL and the KHL for Kovalchuk's services -- if I'm Anaheim's GM I think priority #1 would be figuring out how much the orange-shaded players cost, then work backwards from there.  But I dunno -- do any Ducks fans think we should make an attempt at Kovalchuk?  He at least would have to help out Anaheim's woeful power play (5 for 55 over the last 17 games).

Prediction: I should be around for comments this afternoon; stop on by.  Ducks 4, Thrashers 3.  Goals by Chipchura, Ryan, Beleskey, and KOIVU!