Ducks Gameday -- On the Road with the Blue Man Group

Share All sharing options for: Ducks Gameday -- On the Road with the Blue Man Group

I was going to take a way-too-quick look at the woes of the Blues' season, but Mike talked through some of those issues yesterday.  I will add that the Blues have enjoyed/suffered an extreme road-happy 1st-half of the season -- they have the fewest home wins in the NHL, and yet they also have the fewest road regulation losses.  For some reason, they' play way better hockey away from St. Louis, especially defensively.  St. Louis is allowing 3.30 goals-per-game at home and 2.32 goals-per-game on the road -- nearly a whopping full-goal's difference. 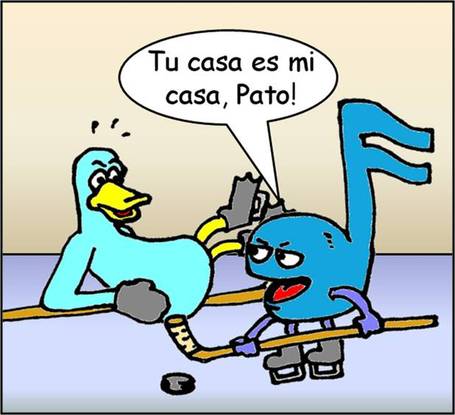 Why of course the bluenote speaks derogatory Spanish. Duh.

Ducks are 11-4-2 against St. Louis since the lockout, which would be comforting except the one meeting this season was a 5-0 Blues thumping in Anaheim.  I didn't see a lick of that game and I won't be around tonight -- play nice in the comments.  Still, the Ducks have won their last four at home -- here's hoping they can extend that.

As for top-six injuries, looks like still no Teemu tonight.  Per the OC Register Ducks blog, lines should or could be:

Prediction: Ducks win in, what the hell, a shootout.  Could happen.  :)