Ducks Gamedays -- Let's try this again, shall we?

Share All sharing options for: Ducks Gamedays -- Let's try this again, shall we?

So Rudy has offered his take on Tuesday night's debacle, but I guess I'll have to settle for the Positivity! spin -- at least it was an ass-kicking that didn't cost the Ducks any standings points.  It could be the kind of harsh lesson that turns this team around, but I don't say that with a lot of confidence -- seems they could have learned these lessons a year ago, and so far it doesn't appear to have happened.

But I'm sure that they're ready to turn that corner, right?  I mean, they've got potential new ticketholders in the house and wouldn't want to scare them away.  And also, I have this inspiring cartoon! 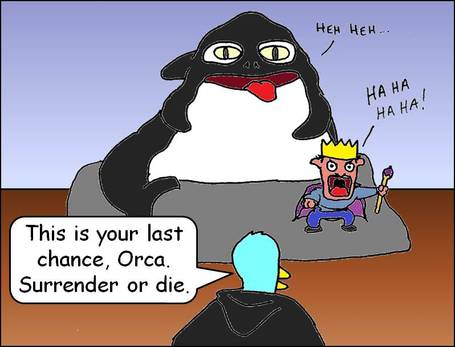 As Rudy noted, I'm going to both of Anaheim's remaining preseason games -- tonight with a Canucks buddy of mine somewhere in the lower bowl, and on Sunday I'll be down in Row B with Arthur and Jen from Anaheim Calling.  If you see a tall dude in a green shirt, feel free to say hi.

Predictions: Ducks 4, Opponents 2 each game.  Goals by Perry, Getzlaf, The Rat (x2), Chipchura, Teemu, Sutton, and a masked dude who might be Vayoo.