Some days you're just not ready to write a post, and then Spade comes along and gets you jump-started: 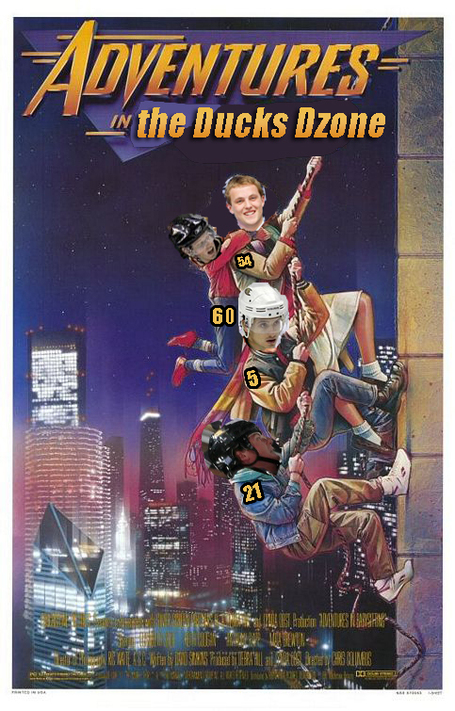 It definitely has been an adventure for Anaheim's defensemen -- see previous posts for justification -- but with the debuts of Toni Lydman and Andreas Lilja around the corner, plus the eventual return of Andy Sutton, the Ducks may eventually find themselves with more babysitters than babies.  It's a bit early still to talk about what a fully-healthy top-six might look like (I still need to see Lydman and Lilja play a bit), but it is encouraging that there are so many options that could make it.  Somewhere in this mix of names -- Visnovsky, Sutton, Lydman, Lilja, Fowler, Mikkelson, Sbisa, Brookbank, Mara -- there should be a combination that definitely could make a capable blueline, with useful extra bodies when needed.

Let's just hope for Hiller's sake that it doesn't take all season to find out which combination works.

I haven't done a good job of highlighting it, but late in the summer I participated in a Ducks panel over at Andyheim featuring Adam Brady, Dan Wood, Arthur Javier, Andy Elvstrand, and Rickard Fransson -- not a bad pool of pundits, even if it does include myself.  Andy posted the group's answers in five separate posts, and here they are for easy perusal -- I will note that I "cheated" on my answers by procrastinating a few weeks while the answers got more solidified; some of these guys answered in a more timely and professional manner:

Tonight I'll be away from game comments -- feel free to carry on without me.  I've instead been roped into driving up to Staples Center to watch the Kings and Canucks play -- Rudy should have more on that.  But that's not really the game that interests me tonight -- after the NHL shenanigans end, two of my buddies are going to be playing a rec hockey game on Staples Center ice.  This isn't really new -- I've attended quite a few games with these guys to see their afterwards-hockey.

However -- here's the kicker.  For some unknown-to-me reason, these guys have lured former King great Marty McSorley to play with them in the post-Kings game.  One of my buddies will be on Marty's team, and my other pal will be playing against him.  I've challenged both of them to at one point in the game try to level Marty, but I doubt either one is stupid enough to listen to me.

We've already made several other jokes about what my pals should do with Marty tonight -- wear #99 and tuck in one side of the jersey for the reflexive McSorley protection; make an illegal stick joke with 1 minute left to play, then a Brashear joke once you're in the parking lot with your engine running -- but certainly, feel free to leave your silly suggestions in the comments, and if you're at Staples tonight, maybe consider sticking around after the final whistle -- I'll be somewhere in the small lingering audience (no green shirt, though -- that's for Ducks only).