BoC At The Movies: Jackass 3D

Share All sharing options for: BoC At The Movies: Jackass 3D 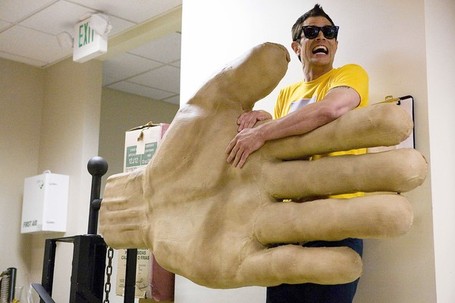 There's one scene where they trap Bam in a pit of snakes and he freaks the fuck out because he's a pussy and is afraid of snakes. He finally gets out of the pit and is complaining about how their all fucking dicks and the camera slowly pans over and Johnny Knoxville is standing there, wearing a pink shirt with "totally straight" written in rainbow lettering and on the top of his head is a tiny little sailor's hat. And the whole time Bam is freaking out Johnny is trying his hardest not to laugh but it's really hard because HOLY SHIT is Bam being a pussy. Bam finally walks away, still complaining, and when he's finally out of frame Johnny bursts out into a giggle.

There's another scene where Johnny is dressed up as a football player and he's going to catch a ball up the middle while Jared Allen tries to fuck his shit up. The cameraman asks Ryan Dunn, "Do you think Johnny's going to catch the ball?" and Dunn looks at him like he's an idiot and says, "Who gives a shit?"

You should see this movie.