Ducks Gameday -- You can't make a blueline omelet without losing some prospects to waiver claims.

Share All sharing options for: Ducks Gameday -- You can't make a blueline omelet without losing some prospects to waiver claims.

I'll warn you ahead of time -- today's post is a bit light, because tomorrow I'm posting Episode V: The Empire Strikes Back.  Just like in Episode IV, it's getting way too long and way too corny, but so it goes -- make sure you're caught up and bring some popcorn along with your coffee in the morning.

Anyways, the Calgary Flames claimed Brendan Mikkelson off of waivers yesterday, which really sort of surprised me -- doesn't it seem lately that all sorts of players pass through waivers nearly all the time these days?  I was beginning to think that waiver claims were as idle a threat as B-Ry offer sheets, but now B-Mikk gets to go join B-Mo off in Alberta.

I suppose I ought to be more devastated -- Rudy texted me demanding to know why Brookbank wasn't waived instead -- but Mikkelson and Sbisa both seem to have lost the "which kid can hang" contest to Cam Fowler for now, and it seems useless to have him sit in the pressbox while Toni Lydman, Andreas Lilja, and eventually Andy Sutton get into the lineup.  Demotion was the right move, and waivers are just the risk that comes with it.  Sure, maybe the Ducks lost a decent kid, but with Maras and Liljas sitting around each summer for cheap, I don't know that I'll lose too much sleep over it.

Besides, who knows?  Ducks might just claim him back next week Chris Kunitz-style.  Cartoon! 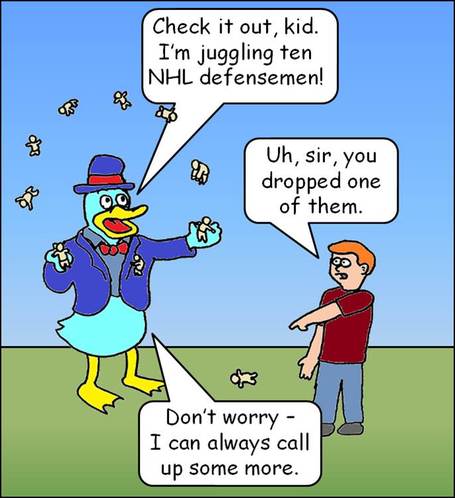 In honor of today's opponent, the duck is wearing a blue jacket.

That's right -- six games so far and the Ducks have already dressed ten defensemen -- Visnovsky, Mara, Fowler, Brookbank, Mikkelson, Sbisa, Lydman, Lilja, Sutton, and Festerling.  It's like an in-season training camp!  With Mikkelson gone, Sbisa and Festerling demoted, and Sutton injured, Anaheim has even recalled offseason-signing Danny Syvret to potentially become their eleventh -- that's fitting, though, as he was signed to play the extra-man role.

We shall see where this all ends up, but I really did like the lineup from last game:

Carter was a great insert on the third line, if he can keep it up, as it allows Marchant and Chipchura to be excellent fourth-liners and fresher penalty-killers.  Dropping the Rat down on the third line wing helped a lot, too -- double the hustle.  On the back end, Lilja looked great at stabilizing Brookbank, and Lydman seemed to work well with Lubo, too.  Mara's been a great babysitter for Fowler, so in theory, things could be stabilizing.

Now let's see if they can win a game on the road (or heck, even keep it close).  I should be around for game comments -- feel free to stop on by.

Prediction: Ducks win a tight one when Sammy Pahlsson puts it in the wrong net.