Positivity!  The Anaheim Ducks are on pace to make the playoffs!  Wait, wait, hear me out.

Sure, the Ducks are 0-5-0 against Central Division opponents, but that will only ultimately make up 20 games of the full-season schedule.  Even if we project that to a total of zero points, guess what?

The Ducks are 3-0-1 against non-Central opponents, which will constitute the remaining 62 games.  If the Ducks can continue to take 7 out of every 8 points available in those games, they'll end up with 108.5 standings points, which should get them into the postseason easily. 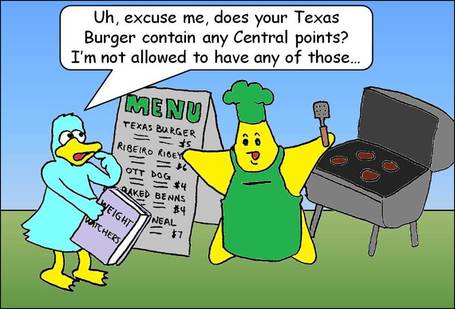 Better make that an Ott Dog to go.

That's all silliness, of course -- Ducks need to find a way to hold leads better if they're going to even pretend to contend.  Nine games played so far, and the Ducks have yet to hold a two-goal lead.  That's pretty amazing to type.

In fact, eleven times the Ducks have pulled into a lead at any point in a tied game:

Still, I guess blowing leads is better than never having them at all -- all of Anaheim's standings points so far have come in games where the Ducks have blown leads.

Prediction: The Stars are a non-Central opponent, so the Ducks take the necessary 1.75 standings points to stay on playoff pace.  After blowing two leads, the late-enough-tie-breaking goal by Koivu.