(Earl and I are collaborating on today's post, and since he's busy re-writing hymns to include the name "Samsung" in place of "Jesus" he did the above cartoon ahead of time and left the writing to me.)

The hockey world is a strange and frightening place these days. The best teams in the league are the Kings and the Canadiens, while teams like the Devils and Sabres languish near the bottom of the standings. It is in this cruel universe that our heroes find themselves: two teams with dreams of glory currently 12th and 14th in the Western Conference.

In many ways our teams mirror each other: incredibly talented, Olympic-level top lines coupled with question marks on defense and in goal. Both teams have failed to put together more than two wins in a row so far this young season, but both teams were able to take advantage of the terrible New Jersey Devils in order to get a big victory - wait, hold on...the Ducks DIDN'T beat the Devils? Hah! Never mind about that then.

Games between these two teams are always intense, with frequent fights and very physical play. The Sharks and Ducks have a rivalry that most people who aren't fans of either team can't appreciate, but that is built on a history of divisional hatred and playoffs struggles. Tonight both teams will be fighting hard for an important win: the Ducks will be looking to bounce back from last night's loss while the Sharks need to start putting up some victories if they are going to challenge for a top seed this season.

In the spirit of Halloween, I'll end with some statistics that should frighten any Ducks fan who reads them. You have been warned. 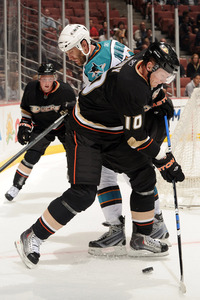 Goals Against Per Game

Prediction: The Ducks throw a bomb at the Sharks and it explodes but it turns out it was a fake body-double of the Sharks and it was filled with bees and hornets, which chase after the Ducks and string them mercilessly while the Sharks watch and laugh. The Sharks win 5 -3, with Sharks goals by Thornton, Marleau, Heatley, Boyle, and Pavelski. Ducks goals by Getzlaf, Perry, and one of your crappy defensemen on a fluke bounce.