Instead of focusing on that, though, I thought I'd get distractionary and talk about what's quickly becoming one of my favorite shows on television -- Dual Survival on the Discovery Channel.  Granted, I'm a guy who watches lots of survivalist shows, and I like a lot of them -- Man vs. Wild, Survivorman, The Alaska Experiment Parts 1 and 2, and even the recent Man, Woman, Wild -- each in their own way are pretty damn good shows about survival tactics in somewhat manufactured scenarios.  Heck, I'll even wallow through The Colony, with all its horrible weekly gimmicks (Kidnapping?  Again?).

But for me, Dual Survival may be the best show of the bunch.  Because at its heart, it's not really just a survivalist show -- it's a collision of personalities, a sort of Outdoors Odd Couple, if you will.  One gatherer, one hunter.  Meet Cody and Dave: 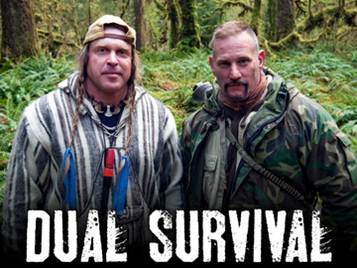 Bush Hippie and G.I. Joe, as they've been known to call each other.

Sure, at first or second glance neither guy seems to fit the TV survivalist profile -- they're both bulky fellows and neither one is going to scamper up any trees or ravines like Bear Grylls or anything, but they are both surprisingly charismatic and instructional, each bringing his own approach to mother nature.  I don't think that Cody and Dave even know each other very well -- someone brought the two of them together, and for whatever reason, it works great.

From the show bios:

Cody honed his expertise living in the deserts and mountains with very little gear or assistance — including two years spent living in a brush shelter in the woods where he slept on pine needles and cooked over an open fire.

Lundin lives in a self designed, off-the-grid solar earth home in the high-desert wilderness of Northern Arizona.  There, he catches rain, composts waste and pays nothing for heating and cooling.  He has been going barefoot for more than 20 years, part of his indigenous self-reliant philosophy.

I've bolded the key phrase here -- Cody is a bush hippie who insists on going barefoot, even in bad terrain and weather (caveats: in the winter episode I saw, he did agree to wear socks, and once in Peru he did build sandals from a spare tire, but these are rare moments).  Cody believes that while going barefoot slows him down, it allows him to better survey the opportunities around him, and he is an impressive gatherer of resources -- he's very knowledgeable about what plants and insects are edible or useful.  Cody's also an expert in primitive fire-building, water purifying, shelter-building, and he's seemingly at home in a lot of lonely environments.

Cody stresses his belief that nature is neither for you or against you, all you can do is take what she provides and endure what she unleashes.  He's quite aware that he's living an extreme way of life, but it's tough to argue -- he seems really at peace with it.

Dave Canterbury has more than 20 years of combined military and civilian survival experience.  He joined the U.S. Army at age 17, eventually becoming a Special Reaction Team (SRT) instructor and sniper.  He trained soldiers in the U.S., Central America and Korea in unarmed combat and close-quarter techniques.

After leaving the Army, Canterbury worked on a reptile farm and as a commercial fisherman and diver in the Florida saltwater marshes.  He put his background, skills and training to work for the next phase of his career — learning and now teaching wilderness survival at his Pathfinder Training School in Southeast Ohio.

Dave is the army sniper, the tracker, and the guy who likes to go primitive-weapon game hunting in his free time.  He doesn't kill to excess or anything, but he certainly enjoys each kill, which happens at least once per show.  It's not too often that Dave comes back from a hunting excursion empty-handed, especially after he's been forced to eat some berries or bugs that Cody brings in.  And he's reckless, too -- he'll go after a crocodile or a hive of bees more for the bragging aspect than for the food reward itself.

Unlike Cody, Dave goes in with the mindset that nature is his enemy, and to survive one must tackle her head-on.  He still has the mindset of a soldier, but overall a pretty good-natured one.  He's patient with Cody's slow pace, but loves to bag on his bush hippie ways.

Now each of these guys separately could probably make a good show.  But it's really in putting them together that the show turns into a great one -- oftentimes it's because they complement each other's skillset so well; sometimes it's just in the way they mock the other guy's mindset.  It's an onscreen marriage, in a way -- most of the time they are a cohesive team; then all of a sudden they can't stand each other.

At any rate, I know this is definitely not for all of you, but Discovery Channel is running a semi-marathon of Dual Survival episodes tonight, and since there's no hockey to watch, feel free to try out an episode or two.  Fully Sleek-endorsed.