(Author's note: This post quickly became very ambitious and effort-heavy, and it may seem like a summer project.  But that's not the case -- I had none of this written or drawn 24 hours ago.  Some of it gets pretty cheesy, but play along -- it's Friday.)

Not long from now, in an arena far, far away...

It is a dark period of turmoil for the Ducks blueline.
Anaheim spaceships, striking from a hidden base, have won their first
victory against the evil Eastern Time Zone Empire.

During the battle, Duck spies managed to steal secret plans to the
Empire's ultimate weapon, the Death Wing, an armored space station
with enough power play weapons to destroy an entire season.

Pursued by the Empire's sinister agents, Princess Luca Sbisgana races
back to Switzerland aboard her starship, custodian of the stolen plans that
can save her people and restore freedom to the Pacific...

Cut to: Outer space.  A small KDOC flagship station is being pursued by an enormous NBC Prime Time starship.  The fleeing KDOC ship fires some defensive laser bursts, but it is severely outgunned and quickly overcome by its enormous pursuer.  Quickly, dozens of Ref Troopers (the everyday henchmen of the Eastern Time Zone Empire) blast their way into the KDOC ship.  Behind them strides Darth Pronger, one of the most feared evil agents of the Eastern Empire -- though the Death Wing is not his project specifically, he is clearly pissed off about the stolen plans. 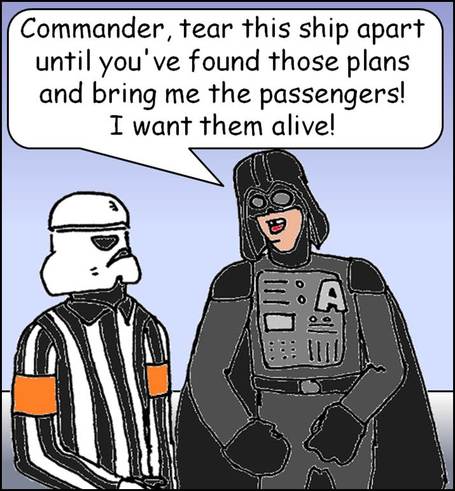 Meanwhile, a few decks below, Princess Luca hears the commotion and begins making a desperation plan involving two Finnish droids -- Saku D2 and Teemu PO.  She records an urgent message and hurriedly sets them off in an escape pod, just seconds before Ref Troopers are finally able to track her down and penalize her into submission. 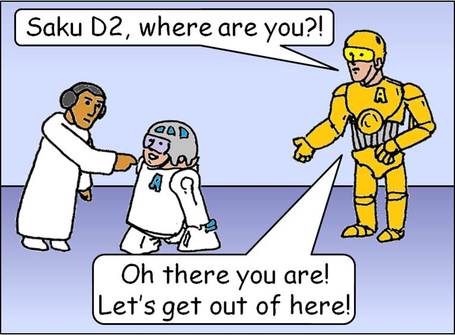 The two Finns take the escape pod down to the remote planet of Windsor, where another junior defenseman's journey is set to begin...

On the surface of the desert Windsor planet, the two Finns are quickly captured by a group of nomadic J-Blakes.  Little rat-like robed creatures, they take their collection of recovered Finns over to the farm of young Cam Puckmover, who lives in the wasteland with his Uncle Festerling and his Aunt Vayoo.  Cam, hopelessly resigned to being stuck another season in Windsor, negotiates with one of the J-Blakes for two of the Finns, but because of a malfunction during physicals, Saku D2 is thrown into the transaction as well. 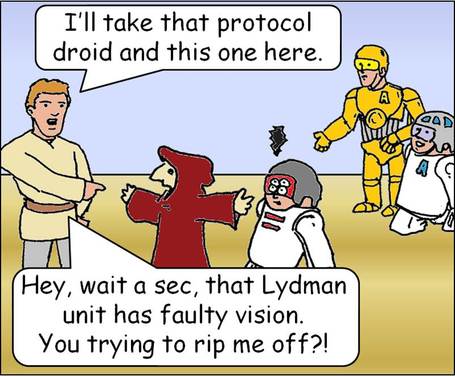 Later that night, while giving the Finns their sauna treatment, Cam stumbles upon the recorded distress message from Princess Luca, and is intrigued by the Duck rebellion.  Saku D2 withholds any more information from the inquisitive lad, but the next day he leads young Cam to the retirement cave dwelling of D-Man Knight Obi-Wan Niedermayer.  Niedermayer seemingly has been waiting for young Cam for a while, and starts to instruct him in the ways of the Boards -- an old tradition that had been once employed by Cam's forefather, Chris Puckmover. 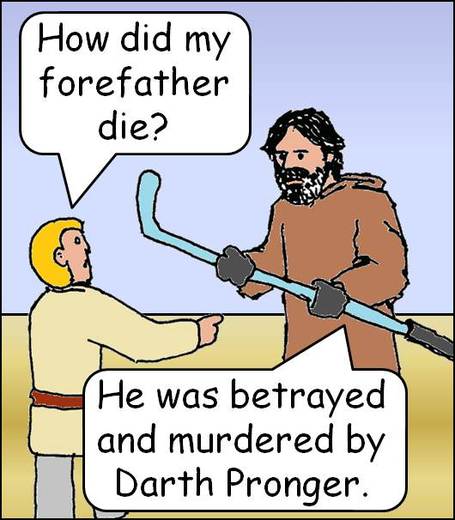 By this time, the Eastern Time Zone Empire has discovered that the stolen plans were not aboard the KDOC flagship station, so they expand their search down to the Windsor planet.  One of the Ref Troopers finds a pivotal clue that puts them back on the Finns' trail.  During their pursuit and investigation, Ref Troopers forcibly waive-and-demote Uncle Festerling and brutally release Aunt Vayoo. 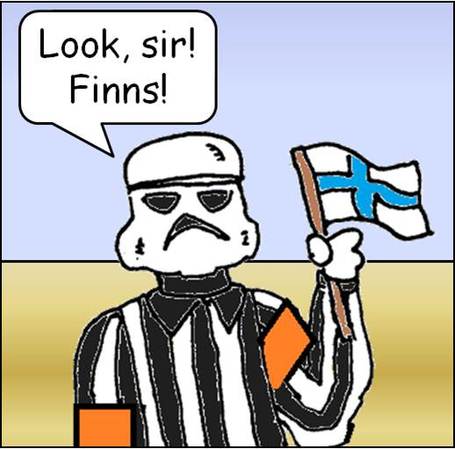 Also, out in deep space, Darth Pronger takes Princess Luca to the newly-completed Death Wing, where she is confronted by the Grand Moff Babcock.  Babcock tries to coerce Luca into revealing the location of the hidden Ducks' base by threatening Luca's homeworld of Switzerland. 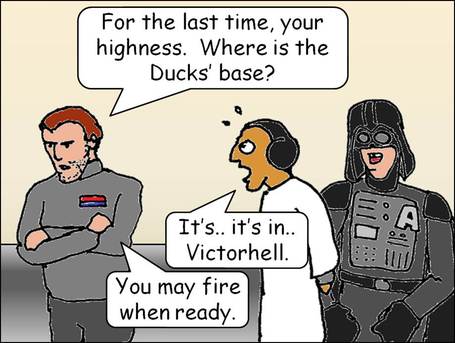 Luca nobly lies -- everybody in the universe knows that Victorhell is a deserted wasteland -- but it doesn't matter.  Grand Moff Babcock is determined to demonstrate the power play weaponry of his new space station, and in a matter of seconds, Switzerland's penalty-killing unit is destroyed.  Luca is devastated.

Back on Windsor, Obi-Wan Niedermayer decides to take young Cam and the two Finns to Mos Eisner Space Port to find passage to Switzerland.  It's a dangerous setting for the young Cam and the Finns, but they do manage to locate one captain -- Getz Solo, who had been voted into the position by his one-man crew, trusty first mate Georgebacca.  They agree to take on the passengers with only one condition -- no questions asked about Getz's hairline. 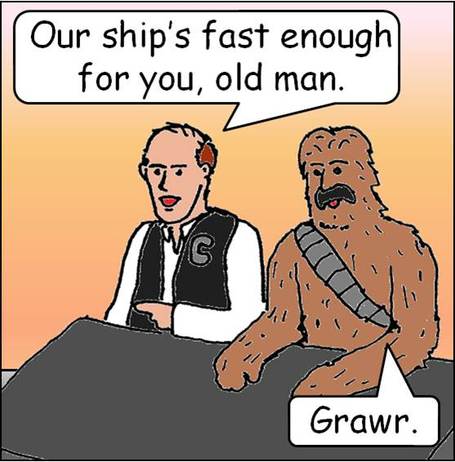 The group escapes Windsor on the weathered yet surprisingly efficient Honda Falcon, but once they arrive at the coordinates for Switzerland, all they spot is a winged-wheel moon.  That is, of course, the Death Wing, and the Honda Falcon is brought aboard by tractor beam. 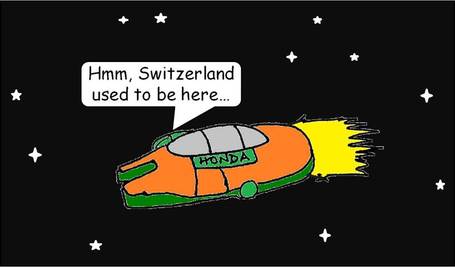 Once aboard the giant space station, Cam and Getz decide to free Princess Luca while Obi-wan Niedermayer works to disable the tractor beam's power source.  Everything goes more or less to plan -- the Ducks do take a late lead thanks to some Getz heroics -- but as they are escaping, Darth Pronger confronts Obi-Wan Niedermayer for a final battle.  Pronger delivers his signature fatal elbow, followed by a wholly inadequate one-game suspension.  It is Cam's turn to be devastated. 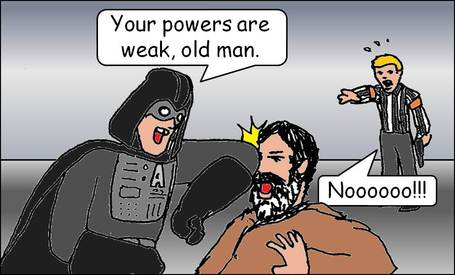 Still, Obi-Wan Niedermayer does take out the tractor beams, so the Honda Falcon escapes, but the Death Wing is not far behind.  The young Ducks know that they will have very little time to analyze the stolen plans in hope of finding the Death Wing's power play weakness. 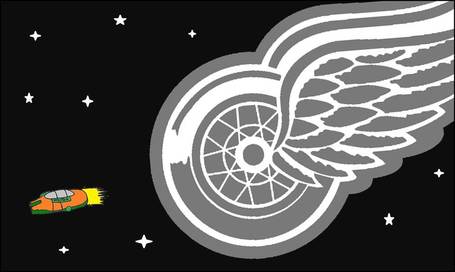 At the Ducks' base, Specialist Marchant briefs the Ducks forces on the data recovered from the Saku D2 unit.  Careful analysis shows that there is one point where the Ducks can neutralize the Death Wing's power play efficiency, but it will take an extreme combination of composure and accuracy. 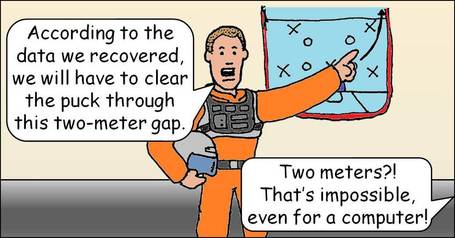 Young Cam joins the shorthanded Ducks mission sent out to disable the Death Wing, which seems more or less to be a suicide mission.  Ducks forces indeed suffer many casualties, to the point where Cam becomes the Duck rebellion's last surviving hope.  He's understandably nervous, but suddenly he hears a familiar calming voice. 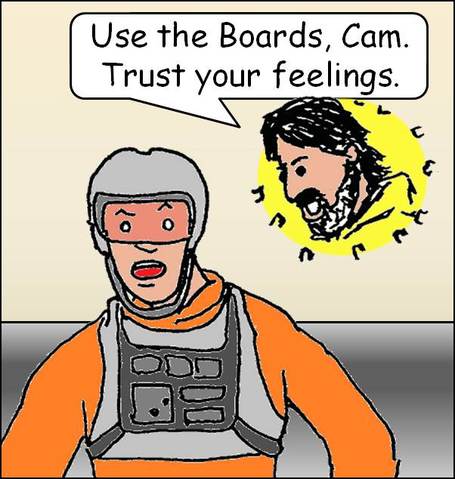 Prediction: In the zero hour, when all seems lost, Cam Puckmover masters the power of the Boards, and the Ducks squeak out a win in their opening battle.  Goals by Saku D2, Getz Solo, Princess Luca, and somehow Aunt Vayoo.