Wooo! Congratulations to the San Francisco Baseball Giants for winning the World's Pennant!

Now I'll admit that I'm not the biggest baseball fan, but it's always good to see the hometown team win. Since moving to San Francisco from New York in 1932, the Giants have only won the championship one other time, in 1974, so this victory was a big relief for their long-suffering fans. The sad days at Candlestick Peak are over!

The Giants are of course led by their awesome batsman Barry Bonds, the dynamic fielding of J.T. Snow, and the clutch pitching of someone I'm told is named "Tim Lincecum." Let's see if Google can help me identify that last guy. 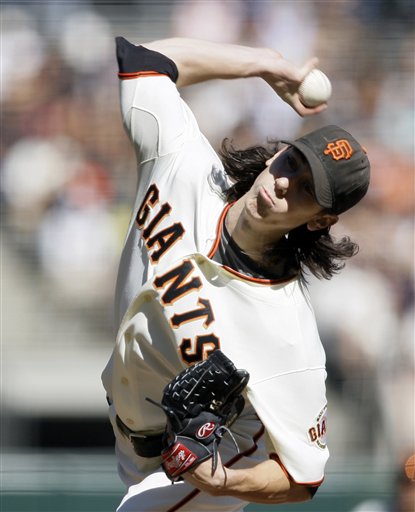 Gah! What the hell is that thing? He looks like the lead singer of Journey crossed with a spider monkey. THIS is a baseball superstar?