So, the Stanley Cup Champion Blackhawks, eh?  I guess I have bigger fish to fry today.

One week ago, I spent a Sunday post looking at the poor Tampa Bay Lightning, an fast-starting eastern-conference-leading team that was cruising through the month of October before it hit a wall -- the California road trip.  Not only did the Lightning drop all three games on that swing, but they haven't truly recovered yet -- Bolts have only one win through the first half of November, and it was at the expense of the lowly Maple Leafs.

For contrast, now let's take a look at the poor, poor New York Islanders, a team that brought an opposite sort of streak to California.  After a strong 4-1-2 start to the season, the Islanders fell back towards the cellar -- they proceeded to lose seven straight regulation games before embarking on their own west coast swing.  In this case, the Ducks, Sharks, and Kings weren't confronting a dangerous opponent with any winning momentum, but rather they were battling against the law of averages -- surely the Isles' unlucky streak had to come to an end at some point on this road trip.  Somewhere in California the Islanders should be able to pick up two standing points, right?

Tragically, no.  Instead of two points, the Islanders picked up two goals.  Ouch.

To his credit, NYI goaltender Dwayne Roloson battled valiantly -- his 2.28 GAA and .919 sv% in California were impressive numbers for the 41-year-old veteran.  It wasn't nearly enough, though -- the other-end combination of Curtis McElhinney, Antero Niittymaki, and Jonathan Quick posted a collectively-insane 0.65 GAA and a .972 sv%.  Islanders skaters took 71 shots-on-goal (plus two shootout attempts), but only 2 made their way into the net.  Even the NYI power play, which had produced 16 goals over the team's first 14 games, went 0-for-California.

You know what's coming next. 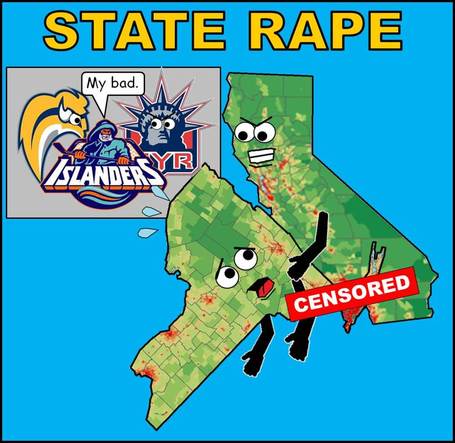 Damn these other multi-team states -- always requiring some clarification.  :)

I don't really know how often these State Rape opportunities will occur this season, but visitors beware -- the Ducks, Kings, and Sharks now have a collective home record of 20-3-3, and one of those overtime losses was intrastate.

Prediction: The Ducks attempt to take their first road standings points from a Central Division opponent, but instead learn a valuable lesson about parliamentary procedure.  Goals by Perry, Koivu, and Lubo.