MVP: Even with Alexander Semin on the team the Freezers didn't win goals or assists, so the credit has to go to Brian Elliott of Ottawa for helping the Freezers wrap up most of the goaltending categories.

This was a match-up between the first- and third-place teams in the Smythe division, and the Slappyville Freezers just BARELY managed to get the win.

MVP: Chris Neil is doing exactly what I picked him up to do, and his 12 penalty minutes helped me win that category this week.

MVP: Four goals in a week from Ryan Kesler is nothing to sneeze at. Or cough at. Or perform any other illness-related bodily function at.

MVP: Steven Stamkos will get it done for you.

LVP: The entire Intaglio goaltending staff. Cam Ward, Pascal Leclaire, and Chris Mason were all terrible last week, and the Anzeholics managed to win the goalie categories even with very weak numbers.

After suffering a slip-up last week the Anzeholics come roaring back to life and are still the team to beat.

Sleek and Destroy vs. Setoguchi's Revenge

MVP: Evgeni Malkin may finally be warming up, which is bad news for whoever has to play Sleek or the Penguins in the next few weeks.

Man that last joke was awesome.

Suddenly none of Kitten Mittens' four goalies are playing well - what will he do?

MVP: Tomas Plekanec helped Rudy get enough points to win even though he still isn't checking his team.

LVP: Maybe BROWS didn't have Ryan Smyth in the lineup on the right day? He got 0 points and was a minus 1.

Rudy manages to prevail in this battle of the basement dwellers.

MVP: Cam Fowler's four assists headed up a strong week for nearly all the Gators players.

LVP: Raffi Torres joined the team a week too late, and didn't contribute anything this week.

Matt Duchene was also bad for McSorley's Stick. It was a whole team effort.

LVP: Remember all those years ago when Jaroslav Halak was amazing? Halak certainly doesn't. 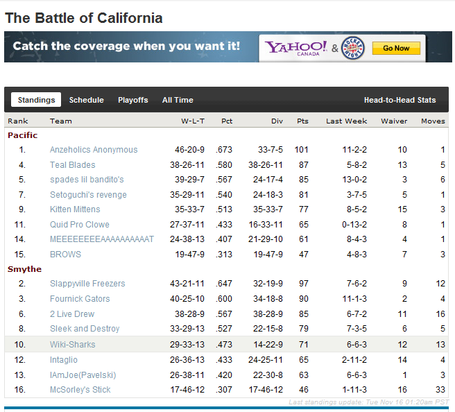