Share All sharing options for: Ducks Gameday -- Encouraging Stat of the Day

The Anaheim Ducks have spent a lot of time this season trying to get their blueline in order, and it's been difficult -- Toni Lydman came into camp with double vision, Andy Sutton got hurt in game one, Cam Fowler got hurt in game six, Sheldon Brookbank got hurt in game sixteen, and Andreas Lilja started the season thinking he was a Shark.  Luca Sbisa has been demoted and recalled, Mikkelson, Festerling, and Syvret have played at times, and all this while Lubomir Visnovsky and Paul Mara have played in every game.

But as more and more defensemen have come back into the lineup, and as pairings have had time to develop some chemistry together, there has been one overly-promising trend.  Check out the table below.

The first five games without Lilja (four of them without Lydman also), the Ducks were awful -- they were outscored and outshot by ridiculous proportions, basically the worst team in the league.  Later, during the stretch where Fowler was injured, the Ducks performed marginally better -- Lydman and Lilja did help stem some of the stats bleeding.  But the third row of data is the key -- when Lydman, Lilja, and Fowler have all played, the Ducks are 7-0-1; when that trio is incomplete, the Ducks are 3-7-1. 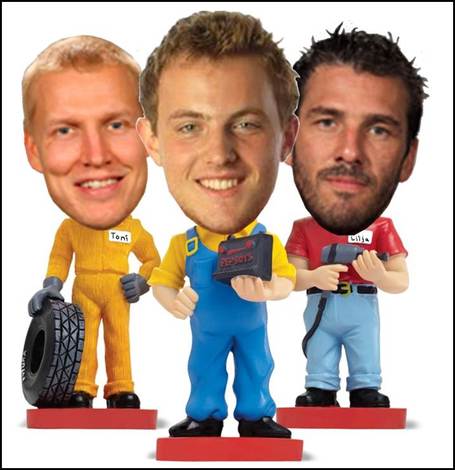 Not sure what I was going for today -- but these guys will get your team running smoothly again.

Now of course the extreme difference in results is overstated -- a lot of the winning corresponds to the stretch of mostly home games when Carlyle's forward lines started to connect and when goaltending was stellar (and generally, when the Ducks have been extremely lucky) -- lots of things have been going right.  But I don't think it's all a fluke, either -- adding competent pieces to a messy blueline can have a drastic effect.

Multicultural side note: the last three games the Ducks have played a blueline featuring defensemen born in six different countries: Visnovsky (Slovakia), Lydman (Finland), Fowler (Canada), Mara (USA), Lilja (Sweden), and Sbisa (Italy).  Brian Burke would never have allowed this much diversity -- remember, the Ducks won the Cup with an entirely Canadian-born blueline.  Off the top of my head, the Ducks really haven't shown this much blueliner diversity since their 2003 Cup run, which featured Ozolinsh (Latvia), Havelid (Sweden), Vishnevski (Russia), and Salei (Belarus), plus two Americans -- Carney and Sauer.

I also should get some word out -- Spade and I will be attending the Ducks/Blackhawks game next week at 1 pm on Friday.  It's the day after Thanksgiving, and it's the day before Spade's birthday, so we'll be pre-drinking at Danny K's Pool Bar on Struck Avenue -- walking distance to the Honda Center.  We're still figuring out specifics and I'll put a post up on that day, but I'll be wearing a green shirt if you want to stop by and say hi.  (Sorry, Idunno -- it's 21+).

Prediction: Lydman, Fowler, and Lilja all play, so the Ducks win 3.0 to 2.1, per the table.  Goals by Ryan, Palmieri, and Koivu.