Kings Gameday: This Week In Humiliation

Share All sharing options for: Kings Gameday: This Week In Humiliation 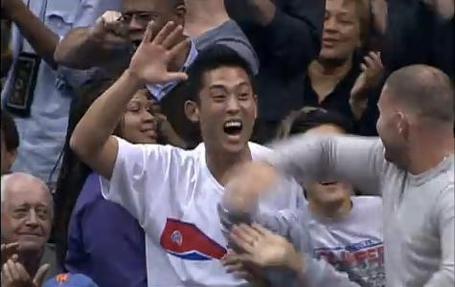 Getting excited at a Clipper game: humiliating

Pro athletes are generally better looking, more athletic, and richer than us. Doesn't mean we can't make fun of them when they screw up, though! And now, here's this week... IN HUMILIATION!!!

Oh Dustin, you truly are a spaz. I don't know how a guy manages to be that good at hockey while completely screwing up multiple times every game, but that's the magic of Dustin Brown. This one's bad because it's Brown making an ass out of himself with no help from any other player. Plus, Brown had the opportunity to win the game with that attempt and instead did... whatever that was. At least Brown was able to laugh it off. He certainly handled that better than...

#2 Corey Perry Scores On His Own Net, Gets Punked By An 18-Year Old, Storms Off

You can't really digest how great this cilp is in one viewing. First, you have the play itself: it's more of an unfortunate accident than a collossal fuck-up, but the fact that it's Corey Perry takes it to hilarious. The best part of plays like that are the 3 or 4 seconds as the puck travels down the ice; you think, "Oh shit, is that... no way it's going to... haha, it did!"

Then you have the aftermath. Taylor Hall, the true star of this clip, points his stick at Corey Perry, yells out his name to get his attention, then gives the international sign for choking. To repeat, Hall:

-POINTED HIS STICK AND LAUGHED AT COREY PERRY

-CALLED OUT HIS NAME TO GET HIS ATTENTION

I now love Taylor Hall. The balls on that kid.

Then, as a cherry on top of this humiliation sundae, you have the sight of Corey Perry, thoroughly embarrassed and alone, destroying his stick in impotent rage before storming off to the locker room. Delicious.

Blake Griffin is a bad, bad man. That fucking sucks for Mozgov & Gallinari: first off, their names are Timofey & Dario, which are just dick moves by their moms. Second off, Mozgov comes all the way from Mother Russia to make glorious triumph putting ball in hoop only to get completely destroyed by a man with a bionic knee. They should just deport him after that. And Gallinari... well, he's Italian and probably bangs super models so fuck him.

The only problem with this clip is that I can't decide which one is worse. The first one on Mozgov is bad because, dude, that guy just used your head to hoist his nuts into your face. The second one on Gallinari is bad because...

The Clippers are humiliating in their own way but Griffin, Eric Gordon and Chris Kaman (haha, just kidding you fucking missing link) are doing their best to change that.

Prediction: Kings win, 4-3. Goals by some dudes. Brown draws 2 penalties, records 6 hits, gets a point, and still manages to look like a buffoon.