LVP: Brian Elliott had three losses and a 6.15 GAA this week. That dude sucks.

Michael Del Zotto was -7 this week, and that still didn't keep Setoguchi's Revenge from winning the +/- category.

MVP: Zdeno Chara isn't just a giant - this week he had two assists, +7, and 12 penalty minutes.

My boy Dan Ellis had a GAA of 15.42 this week. I did not win the goalie categories.

LVP: Alex Goligoski had a 0 in every category this week, except for his awe-inspiring four shots on goal.

Hmmm, the first-place team in the league vs. a guy who isn't checking his team - the outcome is shocking.

Sleek and Destroy vs. Teal Blades

Only one assist for Joe Thornton this week. He won a bunch of faceoffs, but it's still a disappointing showing.

MVP: Seven points and 10 PIMs for Mike Richards this week.

MVP: How long will Carey Price play well? Hopefully not for too much longer.

Every time I try to type out spade's team name I put the apostrophe in the word "spades," where it logically should go, and then I have to "correct" myself and put it at the end.

MVP: With a goal and three assists Dany Heatley is the leading scorer for IAmJoe this week. Looking at the rest of his team though, it really isn't that impressive.

LVP: Duncan Keith copies Goligoski and puts up zeroes in every category aside from four shots.

This was the least-inspiring match-up ever. Both these teams had a ton of players with 0 points this week, and it looks like Mike didn't even set up his team.

MVP: Marc-Andre Fleury is starting to put up some solid numbers again.

MVP: Martin St. Louis had seven points. That one crazy Flyers-Lightning game screwed everything up.

LVP: Raffi Torres was just terrible this week. He should stick to his music career. 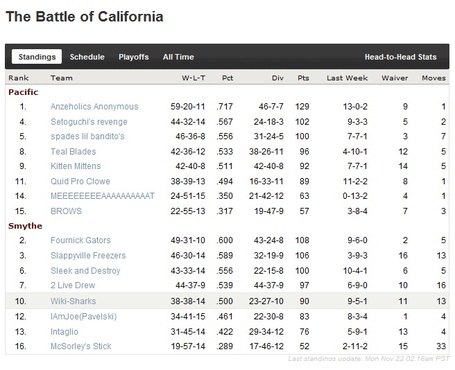