The first meeting of the season is always special, so I went ahead and based today's cartoon on a classic: 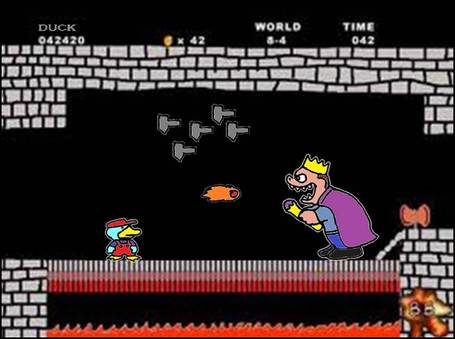 Tip: you have to keep an eye out for those dangerous games-in-hand.

In terms of Ducks injuries, Teemu appears good to go, Lubo is a maybe, and Lupul is a no.  Of course, that's all secondary -- the real question is whether Getzlaf and his line will show up again like they did last game in Phoenix.  Maybe I should point out again how he's a horrible captain?

On a personal note, I'm really unsure how the next three weeks are going to go for me -- thanks to a financial falling-out with Samsung, I've taken a temporary consulting job that's flying me out to Las Vegas this morning, though the trip itself promises way more work than play.  I'll probably be rather comment-absent during the workday today as I'm likely engaged in some meetings, and it's not even assured that I'll be watching the start of tonight's game; it's entirely possible I'm roped into dinner or something, too.

I'd tell you to expect some lazy posts in the near future (I'm physically in Vegas Monday through Thursday of the next three weeks, and may not have any scanner access), but with the Ducks' recent uninspiring losing streak, you're probably already prepared for that.  :)

Prediction: Ducks use some Game Genie codes to sneak a victory.  Goals by the Rat, the Douche, and the Leprechaun.